Jubilee: Celebrating 800 Years of the Autocephaly of the Serbian Church (1st Day) 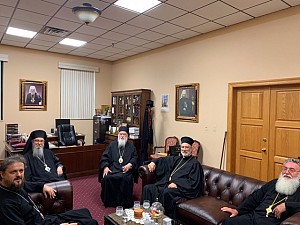 The 22nd Quinquennial Church Assembly of the Serbian Orthodox Dioceses in the United States of America.

The Episcopal Council, the Central Church Council, the National Ministries “Standing Committees" and the Clergy Brotherhood all held preparatory meetings in the late morning/early afternoon.

Bishop Longin first welcomed all the hierarchs, clergy, monastics and delegates from the three Serbian Orthodox Dioceses in the United States of America and thanked them for the sacrifices they make in their work for the good of their Holy Church. These gatherings, His Grace noted, are occasions for joy but also serve as a reminder of the responsibility each of us has to continue the work of the Church and the Holy Faith that we inherited from our holy ancestors. "These occasions are a time for us to rejoice in fellowship but also a time for reflection. We are called to examine ourselves, asking if we are living our faith in the same way as the Holy Nemanjic Family and all of our Holy Serbian ancestors did throughout the centuries,” said Bishop Longin.

Bishop Longin then asked Bishop Irinej to greet the Assembly and to begin its work. Bishop Irinej presented the Agenda proposed by the Epsicopal Council and Central Council, which was unanimously accepted. He then called upon Fr. Nicholas Ceko to present a summation of the most important decisions of the last 21st Assembly and the decisions of the Central Church Council over the 2014-2019 period.

During Vespers, our Serbian Hierarchs were joined by His Eminence Archbishop Demetrios, the recently retired Archbishop of the Greek Orthodox Archdiocese in America and His Eminence Metropolitan Kallistos, the keynote speaker for multiple sessions of the Assembly. After the Saturday evening meal, Metropolitan Kallistos delivered his first keynote address which was attended not only by clergy and delegates but a number of our youth . Our younger generations began arriving in the late afternoon hours in order to participate in the Youth Concerence which was held Saturday evening, led by guest speaker, the Emmy Award-winning actor and devout Orthodox Christian Jonathan Jackson. His talk was entitled “Orthodoxy is real life”. A full report of the conference is forthcoming from the Youth Committee of the Standing Committees of the Serbian Orthodox Diocese in the United States of America.

During the youth conference many delegates enjoyed viewing a new film produced by Prijatelji Bozji, "The Life of St. Mardarije." 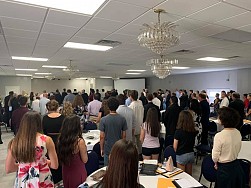