The days of Serbia in the City of North Port 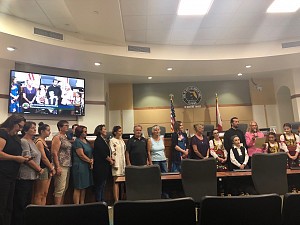 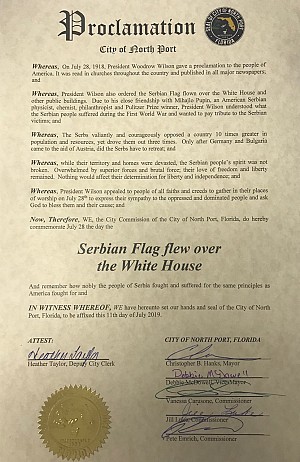 I look forward to having good relations with the City of North Port.

Our community is big in America and has a tradition of over 130 years, the first church was built in the city of Jackson in northern California, in 1894. In Florida we have 6 churches in Clearwater, Orlando, St. Pete, Miami, Jacksonville and North Port.

Our history is great and our people have been going through difficult times. In the World War One, President Woodrow Wilson and the American people helped Serbia! In the World War Two, the Yugoslav Army, in command of General Draza Mihailovic, saved over 500 American and Allied pilots in 1944. These two events in the history of our people are full of love and we should build our future on this love. Many are famous Serbs who have built into American culture, science and history, and the most famous are Mihailo Pupin, Nikola Tesla and Holy Bishop Nikolai Velimirovic. and finally, on the 50th anniversary of the first lunar landing of the Apollo 11 mission, the U.S. Embassy in Belgrade is organizing a series of briefings and presentations by Mr. David Vuich. Mr. Vuich is one of the seven Serbs - affectionately known as the "Serbo 7" - who helped develop the Apollo Space Program."

This afternoon we gave a proclamation to my friends at St. Sava Church, in commemoration of the Day the Serbian Flag flew over the White House in 1918, after WWI.  This was the first year to present a proclamation to them. They honored us with song, music and Serbian donuts! 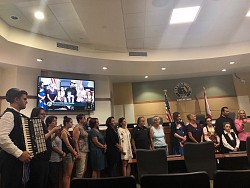