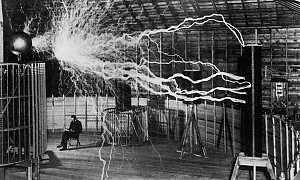 Serbian-American physicist engineer and inventor Nikola Tesla is nowadays famous for his work on electricity and energy.

He developed the alternating current system, making it possible to transmit electricity over vast distances, and worked on wireless communication and energy transfer. He was a brilliant, but also very eccentric thinker, claiming to get visions and displaying odd behaviour in public like an obsession with personal hygiene and pigeons. Maybe the more enigmatic parts of his personality make him such an interesting subject for conspiracy theories. Tesla is credited to have worked on unknown energy-sources, caused the Tunguska explosion with his "death-ray" prototype, and supposedly worked on an earthquake-generator.

In 1896 Tesla was working on oscillations for wireless energy transfer. The idea was to build a steam-powered oscillator, able to create various changing frequencies. If the frequency matched the resonance frequency of a receiving device, this device should transform the mechanical oscillations back into an electric current.

In 1897 the device was ready and in 1898 Tesla supposedly managed to oscillate his laboratory at 48 E. Houston St., New York, enough, that alarmed neighbors called the police and ambulance, fearing an earthquake happening. Tesla later explained the principle to reporter Allan L. Besnson, who in February 1912 published an article about Tesla's resonator in The World Today magazine:

The "earthquake-generator" could also be used for more peaceful applications. Tesla imagined an array of smaller devices distributed all over the planet to relieve energy from Earth and also to send energy from one spot to another. A transmitter, a device consisting of a piston vibrating inside a cylinder, transforms electric energy into vibrations. Using the rocks in the underground as sort of conductor, the vibrations are sent to a receiving device and the oscillations transformed back into electricity, to be used locally. However, the "telegeodynamics" system by Tesla never managed to get beyond the prototype. In reality, the device was not powerful enough to send energy through Earth. Dampening of the oscillations by structures and the underground was far too strong.

Another vision by Tesla was more successful. He imagined using the oscillations generated by his device to study Earth. Seismic waves generated by an oscillator and projected into the underground are reflected back to a receiver by faults or different layers of rocks. Studying the reflected waves, geologists may be able to X-ray Earth (Tesla also made important contributions to modern X-ray technology). Modern seismologists still use this principle. Pulses of energy, generated by electromagnetic devices, controlled explosions or mechanical pistons, are sent deep into the underground. Geophones record the reflected signals and geologists use the collected data to generate a model of the geological structures hidden beneath the surface.