Elpidophoros was enthroned as new Archbishop of America 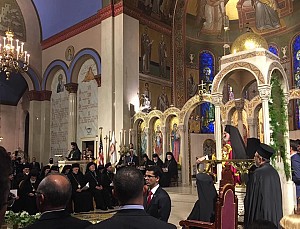 Archbishop Elpidophoros of America was officially installed as the seventh Archbishop of the Greek Orthodox Archdiocese of America, during the enthronement ceremony that took place on Saturday June 22, at the Archdiocesan Cathedral of the Holy Trinity in Manhattan.

Representatives of the governments of the United States, Greece, Cyprus and Turkey, of the autocephalous Churches of Greece and Cyprus as well as American religious leaders and political and business personalities from both the sides of the Atlantic, were present at the ceremony. His Grace Bishop Irinej of Eastern America represented the Serbian Patriarchate.

The new Archbishop accompanied by the representative of the Ecumenical Patriarch Bartholomew, Metropolitan Augustine of Germany, arrived at the Holy Trinity Cathedral little after 11 am. They walked the red carpet that was laid down on 74thStreet, while children were throwing rose petals. Six Evzons of the Presidential Guard sent by the President of the Hellenic Republic, Prokopios Pavlopoulos, paid the honors.

Archbishop Elpidophoros was elected unanimously by the Holy and Sacred Synod of the Ecumenical Patriarchate in Constantinople, on May 11, 2019.

My heart is especially ready and steadfast to serve this Archdiocese and nation, both of which I have long admired since childhood and from my ministry at the Phanar. Through the decades, I have observed the development of the Church here, the challenges it has encountered, and the ground it has broken. So, I am here—your new Archbishop—to listen to you, to dialogue with you, and to work with you. My prayerful aspiration is to stand before you and beside you, to lead by example and exhortation, and to minister through service and sacrifice”, Archbishop Elpidophoros said in his Enthronement Address.

Explaining his vision for the Greek Orthodox Archdiocese of America, Elpidophoros said that if we are to be true to our evangelical roots and spiritual traditions, we must be a Church that embraces our young people and all members of our community and our country.

“The Church—which means all of us—must be ready to meet our youth where they live and where they learn: in our communities, on college campuses, with all of the range and resources of social media at our disposal. We cannot lose any time, and we cannot wait for them to reach out to us. We must offer them a taste of the sacramental life, of the living Body of Christ. We should welcome and embrace them, meeting them—just as the Lord Jesus Himself did with His disciples—on their own terms, in their own hearts, and with their own resources.”

He stressed the need for the development and expansion of the Theological School of Boston, “the heart of education of clergy and formation of leaders for our Archdiocese”, as well as the value of the service to the Church (stewardship).

“In a very real sense, we are all deacons! We are all accountable stewards of the resources of the faithful. And if we face our challenges and hurdles humbly and collectively, then I have every confidence that we shall overcome them. If the Lord is our strength and our salvation—our consolation and our illumination—then our brightest days are surely ahead of us.”

On St. Nicholas Shrine in Ground Zero, he said “it is our duty and our responsibility as Orthodox Christians—but also our obligation and commitment to God and His people—to complete and open the doors of the Saint Nicholas National Shrine as a witness and vision of what is best and what is beautiful in all people of faith and religious conviction. I assure you that my heart is ready and steadfast in this task as well.”

He expressed his gratitude to the Ecumenical Patriarch Bartholomew, Metropolitan Augustine and all his predecessors, “who have shaped and defined this exceptional church. These include first His Eminence Demetrios, who has honored me with his presence today in order to transmit to me the church that he so faithfully and attentively ministered for two decades. But also Archbishop Iakovos, who boldly walked beside Martin Luther King Junior against the cultural tide of the time and even against the advice of his peers.”

The congregation offered a two minute standing ovation to Archbishop Demetrios, who was standing to the left of Elpidophoros.

He also mentioned Archbishop and later Ecumenical Patriarch Athenagors, who – as he said – recognized the importance of breaking down barriers with other church confessions and faith communities.

“My aspiration is to plant and multiply their diverse gifts in the fertile soil of this church and land as I reach out in a dialogue of love and truth to our ecumenical and interfaith brothers and sisters. My heart is certainly ready and steadfast to follow their groundbreaking lead and their illustrious example.”

Entering the Church and before taking his place on the throne, the Archbishop kissed his mother.

Secretary of Health Alex Azar paid tribute to the contributions of the Greek Americans in this country, mentioning specifically the contribution of late Archbishop Iakovos in the defense of civil and racial rights. He also mentioned Archbishop Demetrios contribution, following the September 11 terrorist attack in the World Trade Center.

Secretary Azar conveyed the greetings of U.S. President Trump and Vice President Pence and he noted the strong support of the U.S. government to the religious freedom worldwide. He also pointed out the need for the opening of the Halki Seminary.

The representative of the Ecumenical Patriarch, Metropolitan Augustine, called on the new Archbishop to honor the confidence showed to him by His All Holiness and the Holy Synod, which elected him unanimously on May 11.

Following the enthronement ceremony, the official luncheon took place, attended by over 1,500 people. 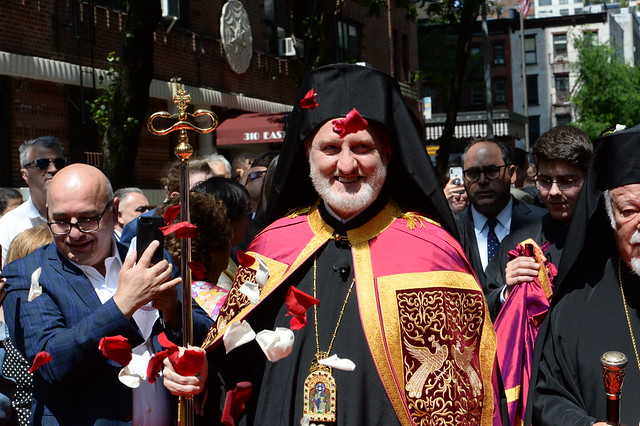