Lecturing  at Fordham’s Lincoln Center campus on June 4, His Grace Rowan Williams, D.Phil., Master of Magdalene College at the University of Cambridge, brought forth the words of early Christian thinking to make the case that the pursuit of knowledge is inextricably bound to humanity’s connections to God.

“Reason is what attunes us to the reality of where we live, in a way that makes possible the fullest mutual movement of life and intelligent communication. It is to be understood theologically as the embodiment in time and space of the eternal receiving, communicating, and responding that is the life of the second divine metamorphosis,” he said.

“To live consistently as human spirits within this logos-animated exchange is deification—theosis—in the sense of growing into the filial identity for which we are all made.”

Williams, a distinguished theologian and cleric who served as the Archbishop of Canterbury from 2002 to 2012, delivered “The Embodied Logos: The Renewal of Mind and the Transformation of Sense,” on the second day of the Patterson Triennial Conference. The conference, which is held every three years by Fordham’s Orthodox Christian Studies Center, is possible thanks to a 2008 gift from Solon and Marianna Patterson.

In his talk, Williams reflected on the writings of Evagrius Ponticus, a Christian monk who lived from 345-399. In particular, he focused on writings such as Ponticus’ The Gnostikos, which translates as “the person with knowledge.”

In it, he said, Ponticus proposed that there are two kinds of knowledge: knowledge we acquire from the outside, and knowledge that comes from God. The former allows us to engage with the reality of the material things around us, while the latter “brings realities into direct contact with our intellective capacity.”

A key challenge for us, he said, is to fully embrace the latter. When we allow ourselves to become enamored with the knowledge we acquire ourselves, or “passionate knowledge,” we neglect to see how we are connected to all things, and are thus prevented from experiencing logos—the Greek word for the word of God, also thought of as the principle of divine reason and creative order.

“The problem then is not that we have made a mistake about our world, but that in one crucial sense, we have mistaken what the world itself is. We have acted, or reacted as though the world were a separate agent or set of agencies with an interest or a gender standing in rivalry to our own individual interests,” he said.

“True knowledge is to know what we know in its relation to its maker. … To know anything or to know anyone is to know them in that way.”

Before introducing Williams, Joseph M. McShane, S.J., President of Fordham, presented His Eminence Archbishop Demetrios, primate of the Greek Orthodox Church in America, with the President’s Medal, one of the University’s highest honors.

The Archbishop was awarded an honorary degree from Fordham in a ceremony in 2007, and given his retirement a month ago, Father McShane said it was fitting to honor him again for bringing the community of the Greek Orthodox church to a “position of great renewal.”

“He has been a man of deep learning and deep holiness,” he said.

“When I introduced him to Pope Benedict when the Pope was here in New York, I reflected afterward that it was a great honor to introduce the Pope to a saint. I stand by this. He has simply been an amazing presence in the United States.”

The Archbishop, for whom the Orthodox Christian Studies Program’s first chair was named in 2013, was equally effusive in his thanks, saying it was a great surprise to receive it.

“This is a tremendous gift, and knowing that Father McShane is a person of truth, in what he does, what he is, and what he says, that makes this offering that much more important,” he said. 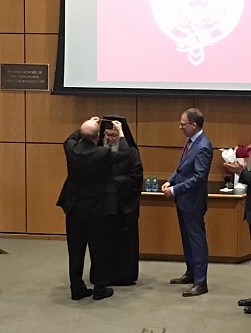