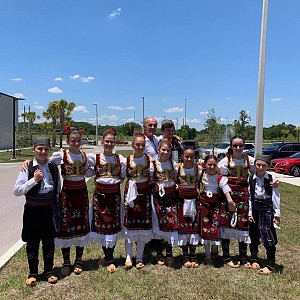 There was a very good attendance for the show.  A special guest in attendance was Jill Luke, North Port City Commissioner as well as the Library Manager Will Blydewburg (who came in on his day off) and Assistant Library Manager Joann Schmaler.

A talk was given by Diana-Dukich Schober about the life of Milunka Savich; the Serbian Flag being raised over the White House; and the WWII Halyard Rescue Mission during WWII.  Informational flyers on the subjects talked about were given to the audience.

It was a privilege to have our Founder & CEO and a member of World War One Centennial Committee Ms. Svetlana Rogić present the visual-literary exhibit “Тамо далеко: 1918-2018” / “Over There, So Far Away: 1918 - 2018” by Mr. Marinko Lugonja and Mr. Marko Kentera at the National Press Club during academic symposium about Serbia and America in WWI on the historic occasion of commemorating the centennial of President Woodrow Wilson’s proclamation of the Day of Prayer for Serbia and the Day Serbian Flag flew over the White House!

We wish to thank His Grace Bishop Irinej of Eastern America, our partner organization Department of Christian Education of the Eastern Diocese of the Serbian Orthodox Church and it’s Director Deacon Dr. Jovan Aničić, Fr. Saša Djurdjević who introduced us to two partner organizations from Serbia - Association for Preservation of Tradition and Cultural Heritage of the Valjevo Region and Tipon Agency from Belgrade).

Fr. Sasa Djurdjevic showed two short films on the raising of the flag over the White House in 1918 and on Mihajlo Pupin.

The children put on a beautiful show accompanied by Alexi Blagonadezhdin on the accordion.  Anastasija Djurdjevic and Mila Djuric were featured soloists singing traditional Serbian songs.  The group also wore their new “nosnje” which arrived recently from Serbia.  After the performance, the dancers were treated to a pizza dinner.

The folklore group also recently had a very successful chevap dinner as a fund raiser at the Church and they have performed at the area Churches in Miami, Orlando, St. Petersburg and Clearwater, Florida. 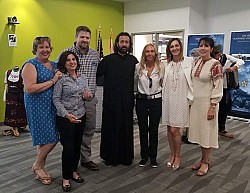