NEW YORK CITY: PASCHA IN THE SYNODAL CATHEDRAL OF THE SIGN 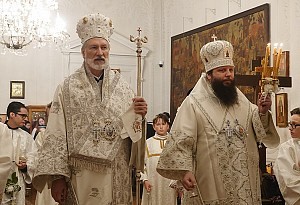 On Saturday night and early Sunday morning, April 27-28, Paschal celebrations were held in the Synodal Cathedral of the Sign in New York City, led by Eastern American Diocesan vicar Bishop Nicholas of Manhattan.

The divine services were held under the aegis of the Protectress of the Russian Diaspora – the Kursk Root Icon of the Mother of God. The expanded Synodal choir sang prayerfully and triumphally under the direction of conductor Peter Fekula.

At the services, the clergy alternated vestments of various colors, and congratulated their brother clergy and the faithful with Christ’s Resurrection. Exclamations of "Christ is Risen!" resounded in Slavonic, Greek, English, Serbian, and other languages.

In keeping with tradition, the Gospel reading was performed in various languages, as well.

The choir was filled with worshippers, who shared in the joy of Christ’s Resurrection with the clergy and their brother-parishioners. Most of those present communed of Christ’s Holy Mysteries, which was given from three chalices. Upon completion of Liturgy, the artos was blessed.

The sisterhood prepared a banquet in the cathedral hall for the clergy, parishioners, and guests. Fr. Andrei Sommer congratulated Bishop Nicholas with the feast, and sincerely thanked the archpastor for leading the divine services of Great Lent and Pascha, for his kind and caring attitude toward the clergy and faithful.

In response, His Grace congratulated all with the radiant feast of Pascha, and thanked the cathedral clergy, altar servers, choir, sisterhood, and parishioners for their labors and joint prayers.

Their interaction continued almost until sunrise.

Illumined, the people headed home to the various ends of New York City and neighboring New Jersey, bearing as it were a precious treasure the news that Christ had risen 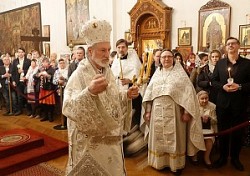