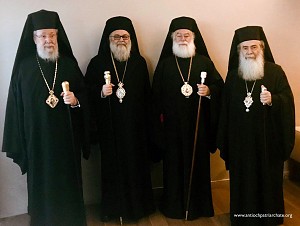 Their Holinesses and Beatitudes, the Primates of the Orthodox Churches in the Middles East, held a meeting that gathered Theodoros II, Patriarch of Alexandria, John X, Patriarch of Antioch, Theophilos III, Patriarch of Jerusalem and Chrysostomos II, Archbishop of Cyprus, at the Cypriot’s Archbishopric Headquarters, on April 18, 2019.

In their meeting, they prayed for peace of the whole world, and for the stability of the local holy Churches, especially in the Middle East, the region which is going through many trials.

They also supplicated God to establish and strengthen the people of this region, that the believers may continue their Orthodox witness for the Risen Christ, especially in this blessed land on which the feet of Christ and His holy and glorious apostles have trodden, and in the whole world, which is longing for the message of the Gospel and for the hope of His salvation.

Their Holinesses and Beatitudes stressed the need to make every effort in order to ensure stability in the Middle East.

They discussed the most important ecclesiastical issues relating to the consolidation of the Christian presence in this region and the deepening of cooperation between the local Churches for this purpose.

They also appealed to all responsible people to work hard in order to develop this region, by lifting the injustice suffered by their peoples, as a result of war, occupation, and the ensuing economic hardship.

In a private meeting between the Patriarch of Antioch and the Patriarch of Jerusalem, Their Beatitudes discussed together in a spirit of sincerity, brotherhood and love, and exchanged views on the issue related to both Churches.

They expressed their sincere determination and good intention to overcome these problems in the nearest future, in order for both Churches to reach the sought Eucharistic communion.

In addition, Their Holinesses and Beatitudes, the Primates of Orthodox Churches in the Middle East, discussed the various ecclesiastical problems that arose at different times in the bosom of the Orthodox Church and examined possible ways to end these differences.

They also looked into the problems that arose after granting autocephaly to the Orthodox Church in Ukraine. His Beatitude Chrysostomos, Archbishop of Cyprus, briefed them on his personal initiative of mediation.

After listening to His Beatitude, the Primates of the three Churches gave their support for his initiative to carry it for the good of the unity of the Orthodox Church in Christ Jesus.

In this regard, Their Holiness and Beatitude called upon all people concerned to work, on the one hand, to achieve Eucharistic unity, which constitutes the fullness of the Church in Christ Jesus, and on the other hand, to protect the faithful, their churches and their monasteries against all forms of transgressions and all acts of violence coming from any side, whatever the causes and motives are.

Their Holinesses and Beatitudes expressed their sadness at the indifference of various countries and centres of power regarding the fate of the Archbishops of Aleppo, Paul Yazigi and Youhanna Ibrahim, pointing out that this year, the sixth anniversary of their abduction coincides with the beginning of Great and Holy Week.

Finally, the gathered Primates affirmed their desire and determination to continue communicating and working together for the benefit of the Church.

They also stressed that opinions may differ, but the Orthodox Church remains One and shining with the Grace of the Lord, the Incarnate God, carrying on Her path of salvation in this world.

They concluded their meeting by raising heartfelt prayers to our Lord and God Jesus Christ, Who suffered for us, that He may quickly sooth by His Divine Grace the wounds of our peoples, and illuminate by the glorious Light of His Resurrection, that is never overtaken by night, the hearts of all believers, leading us all to peace and inner spiritual stillness, and preserving us in the unity of faith and the bond of love. They also expressed their best wishes to all for a glorious Resurrection.