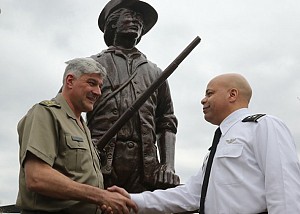 Four members of the Serbian Armed Forces chaplain corps visited in April as part of the 13-year State Partnership Program pairing between the Ohio National Guard and Serbia. The chaplains visited the St. Sava Serbian Eastern Orthodox Church and Notre Dame College to interact with the community and strengthen military and civilian relationships between Serbia and Ohio.

The Serbian Armed Forces members attended a Divine Liturgy at St. Sava Serbian Orthodox Cathedral. This service was the first time in the church's history that military members from Serbia attended a liturgy there. Vlajic, Zatezalo, and U.S. Army Lt. Col. James Sizemore, an Orthodox chaplain assigned to the Ohio National Guard's 174th Air Defense Artillery Brigade, were able to concelebrate the liturgy with local chaplains and  with Bishop Irinej of Eastern America.

"Being able to concelebrate the liturgy here and when we go to Serbia has been a great connection between the churches," said U.S. Army Col. Andrew Aquino, the state chaplain for the Ohio National Guard.

Concelebrating, or jointly officiating, serves as an example of the strengthening relationship between Ohio and Serbia. Since 2010, the Ohio National Guard has been committed to reinforcing and expanding its chaplaincy engagement with the Serbian Armed Forces.

"The partnership between Ohio and Serbia is important because it provides a tremendous model for other chaplaincies to engage their state partners," said Brig. Gen. Kenneth Brandt, the National Guard Bureau joint chaplain and the U.S. Army deputy chief of chaplains. "Trust is a key element of any relationship and Ohio and Serbia have built this trust over time because of stability in relationships."

This allows both nations to learn from one another on how to best take care of their forces, mentally and spiritually.

"It's a way to bring peace to the countries and bring us together," Sizemore said. "We're coming together for fellowship and worshiping together."

After the liturgy, a luncheon was held with the delegation and local community members. The event provided an opportunity for members of the ethnic Serbian community living in the Cleveland area to interact with the Serbian Armed Forces and Ohio National Guard members.

The Ohio National Guard's partnership with Serbia, which started as a military partnership in 2006, has served as the foundation for expanding and building the relationship beyond just the two nation's militaries to bringing prosperity and growth to the civilian sector. The relationships between Ohio and Serbia promote cultural understanding beyond the battlefield and bring benefit to civilian communities in both countries.

Through these vital civilian-to-civilian engagements, like the chaplaincy program, the partnership is able to continue to build ties and promote not only social and cultural relationships but also spiritual ones between nations and people.

The chaplains took part in a panel discussion at Notre Dame College in South Euclid. Students, faculty and local community members had the opportunity to ask the chaplains about the State Partnership Program, the importance of religious traditions in the military and how their personal faiths connect with their role in the military.

"I love the ability for all different faith groups to come together on one panel and share," said U.S. Army Col. Larry Bazer, the deputy director of the joint chaplain's office at National Guard Bureau. "To be able to come together and learn from each other strengthens what are able to do to care for our service members."

Through leadership engagements, Ohio and Serbia have been able to learn from each other and build lasting relationships that will develop and strengthen both nations' armed forces.

"This program is so important for us," Milutinovic said. "Through it, we can achieve a lot of improvement in our chaplaincy. Through the exchanging of experience, we have the possibility to see how the program is run here in America. We get to see how our colleagues are working and how they support their units and Soldiers to do the job."

In 2013, the Ohio National Guard played a vital role in helping the Serbian Armed Forces recreate its chaplaincy program, which had not been active for 70 years. The Ohio National Guard assisted Serbia during the development of its revamped program through exchanging ideas, providing advice and sharing experiences.

"I have a very deep admiration for what the Serbian Armed Forces have done in reinvigorating its chaplaincy," said Maj. Gen. John C. Harris Jr., Ohio adjutant general. "I love the chaplaincy; it means a lot to me. The spiritual wellness of our Soldiers is one of the most important things that we can focus on."

Through the State Partnership Program, Ohio and Serbia have developed a military partnership that has blossomed and extended deeper into a civilian partnership, with more opportunities, as well. The bond between the two nations has transcended military training into relationships among friends that will last for years to come.