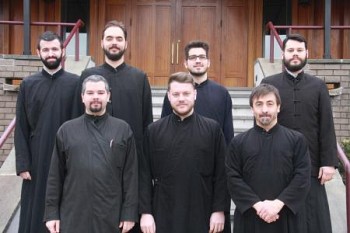 This year, alone, the Seminary is blessed with seven Serbian Orthodox students! One of them, Djordje Tomic, a student of the Diocese of Eastern America, is completing his second year of seminary this May, offered the following observation:

“Having more Serbian Orthodox students around me this year influenced me in every aspect of my life at St. Vlad’s”. “I could feel the presence of Serbian spirit all the time, which both challenged me and encouraged me to improve my knowledge day by day.”

The strong “Serbian spirit” on campus this year is reason to be thankful and rejoice! But that also means your help is needed to keep educating and forming these future servants of the Serbian Church.

The Serbian Scholarship, so generously established by some of the Seminary’s outstanding servants and donors, pays for up to three Serbian Orthodox students each year to attend seminary. Funding is needed, however, for the other four. The Seminary needs to raise $25,000 before the end of the 2018-2019 academic year in May to clear all debt before the other Serbian Orthodox students can register for next year.

One of its founders of the Serbian Scholarship is Trustee Emeritus Dr. Brian Gerich. You can learn more about his and others’ involvement in growing and maintaining the Serbian Orthodox presence at St. Vladimir’s on its website.Humble as he is generous, he offered the following thought:

"People who read Scripture or listen to homilies hear often the commandment to go out and baptize all nations, for some people, they may not feel educated enough or confident enough.”

“Early in my adult life, I realized that I did not have a calling to be an evangelist. But I remember a pious old priest once told me that a well-educated priest, over the life of his service to God, will touch ten thousand lives. That is something that I could get involved in by supporting the Seminary financially. If I could give someone an education at St. Vladimir's, and that person goes out and touches ten thousand lives, that's a bargain.”