SUNDAY OF ORTHODOXY IN AKRON 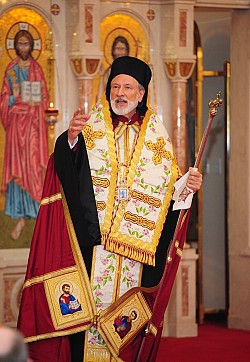 On March 17 th , 2019 the Sunday of the Triumph of Orthodoxy, responding to the invitation of His Grace Bishop Irinej of Eastern America, His Eminence, Archbishop Alexander of Dallas and Southern States (OCA) visited the Holy Archangel Michael Church in Akron, Ohio, and celebrated the Divine Liturgy of St. Basil the Great and led in the parish Rite of Orthodoxy. Concelebrating with His Eminence was His Grace Irinej, Bishop of the Eastern American Diocese of the Serbian Orthodox Church, Fr Milan Pajic, parish priest, Hieromonk Maxim (Ilic), Spiritual Father of New Marcha Monastery and Protodeacon Milos Zdralic. A multitude of parishioners and faithful from Akron came to pray at the Divine Service, many of whom, upon the conclusion of the first week of Great Lent, communed of Christ’s Holy
Mysteries. After the reading of the Holy Gospel, His Grace Bishop Irinej announced the special guest of the Serbian Church – Archbishop Alexander, and asked him to teach all in attendance from the rich font of his garnered wisdom.

Archbishop Alexander congratulated the faithful with the feast of the Triumph of Orthodoxy, and delivered a memorable sermon. He explained to the congregation the words from the Gospel according to Holy Apostol John: Jesus said to him, “Do you believe just because I told you I saw you under the fig tree? You will see greater things than these.” Then He declared, “Truly, truly, I tell you, you will see heaven open and the angels of God ascending and descending on the Son of Man” (John 1:50-51). What does the passage: the angels of God ascending and descending on the Son of Man really mean? Is it not descending and ascending the correct order of words? The answer to this ambiguity can be found in Midrash, an ancient commentary on the Hebrew Scriptures, attached to the biblical text. Explaining the story of Patriarch Jacob’s Ladder, Midrash also explained this ambiguity. In Genesis, the angels also ascend and descend on Patriarch Jacob during his sleep: And Jacob dreamed about a ladder that rested on the earth with its top reaching up to heaven, and God’s angels were ascending and descending on it (Genesis 28, 12). The question is, why did they do that? Why they first ascend and then descend? The angels watched over Patriarch Jacob, and during his sleep, they beheld his face. Then they say to each other: “We know that face, we have seen that face before!” And then they ascend to heaven and there they saw the same face on the God himself. The face of man – in this case Patriarch Jacob, is actually the face of God. This is very important fact that we need to remember on this day when we celebrate the restauration of the holy icons, Archbishop Alexander said. This thought, that the face of incarnated Christ is the face of an ageless God, led the Holy Fathers of the Seventh Ecumenical Council and all other defenders of the Holy Icons through their struggle with the iconoclasts. Today we celebrate their memory, as we celebrate the victory of true Theology, true Christology, depicted in a short explanation of Theosis: God became man, so that man can become god.

At the conclusion of the Service, parishioners and all in attendance participated in the Procession of the Icons. After the procession, all together read the Synodicon and Creed.

In the evening of that same day, Orthodox Christians from all jurisdictions of the Greater Akron area gathered at the Holy Archangel Michael Serbian Orthodox Church for Pan-Orthodox Lenten Vespers, hosted by the Orthodox Clergy Brotherhood of Greater Akron. Presiding over Sunday Vespers, again at the invitation of Bishop Irinej, was His Grace Bishop Paul of Chicago (OCA), in the presence of Archbishop Alexander and Bishop Irinej. More than 20 priests and 6 deacons from various jurisdictions with their parishioners came to celebrate the "Triumph of Orthodoxy" – commemorating the victory over Iconoclasm and the restoration of the veneration of icons. With clergy and faithful from Canton and Cleveland also present, the community realized our Orthodox unity in prayer in a record gathering and, for the first time, in
the presence of three hierarchs.

At the invitation of the Orthodox Clergy Brotherhood of Greater Akron, as the host hierarch, His Grace Bishop Irinej was also invited to be the guest homilist. At the conclusion of the service, His Grace delivered a remarkable homily reflecting on the divisive societal icon of pluralism in light of the icon of Christ, “The Land of the Living” (Η χώρα των ζώντων). The Bishop noted that Christ alone is the unifying icon of pan-humanity. He likened this unto the last book, which the Holy Bishop Nicholai Velimirovich authored, Свечовек, in which he describes coming into unity with Christ the All-Man. He, who is the Existing One, as offered in the anaphora, “on behalf of all, and for all”. His emotionally stirring delivery left everyone fulfilled. The evening culminated in a social gathering in the Parish hall. The parish sisterhood prepared a Lenten luncheon. This provided an opportunity for the faithful to enjoy beautiful fellowship with one another and to acquaint themselves with Archbishop Alexander, Bishop Paul, and Bishop Irinej, as well as other clergy.

During the dinner, a special guest of the Eastern American Diocese, Sister Philothea from the Holy Ascension Monastery on the Mount of Olives in Jerusalem, gave a short presentation about her monastery, daily struggles and attempts to rebuild the destroyed monastery church. His Grace Bishop Irinej translated the presentation. Sister Philothea said that every single person in the Parish hall tonight has a unique opportunity to build themselves into the new Ascension Monastery Church in the Holy City of Jerusalem. This is great and unusual event and every individual contribution to this cause, no matter how small or great, helps immensely. The faithful responded to the call of Sister Philothea and have shown their usual generosity by giving a significant donations to the Holy Ascension Monastery, making this day and evening truly a feast and celebration of the Christian virtue and love. 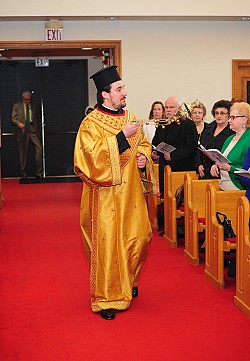