Sunday of Orthodoxy in Monroeville 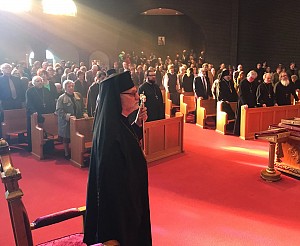 On Sunday, 17th of March 2019, Orthodox Christians from all jurisdictions of the
Greater Pittsburgh area gathered at St. Nicholas Serbian Orthodox Church in
Monroeville for a Pan-Orthodox Lenten Vesper Service, hosted by the Orthodox Clergy
Brotherhood of Greater Pittsburgh. This was the first of five services comprising this
year’s inaugural Orthodox Clergy Brotherhood Lenten Vesperal Services which will be
held on each of the Sundays of Great and Holy Lent this year.

At the conclusion of the service, Archbishop Mark delivered a remarkable homily
reflecting on the Biblical topics of the Sundays leading up to Great and Holy Lent: The
Publican and the Pharisee, the Prodigal Son, and the Last Judgement. His emotionally
stirring delivery left everyone fulfilled. The evening culminated in a social gathering in
the parish hall where dinner was prepared and served by the St. Nicholas parish family.
This provided an opportunity for the faithful to enjoy beautiful fellowship with one
another and to acquaint themselves with Archbishop Mark, as well as other clergy.

The following morning, Archbishop Mark honored the clergy, again at St. Nicholas
Church, as guest lecturer for the Orthodox Clergy Brotherhood Seminar. Archbishop
Mark spoke on pastoral care for those experiencing a crisis situation, at a time of
intense suffering, or the approaching of death of a patient, and how to offer emotional
and spiritual support for both patient and family. After the discussion, the Brotherhood
held a memorial service for the departed clergy: Very Reverend Fathers Thomas
Hopko, Alexander Atti and Dragan Filipovic. The seminar concluded with a Lenten
luncheon, prepared by the St. Nicholas church community. 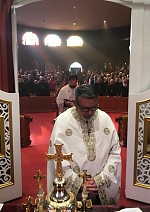