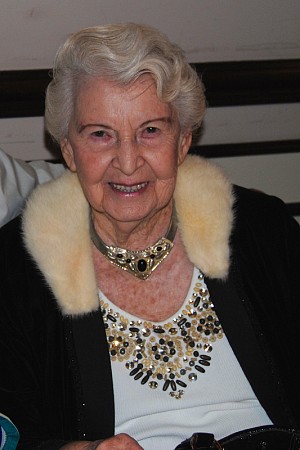 Protinica Gina Radenkovic, fell asleep in the Lord on Friday, March 1, 2019 in Naples, Florida, just 18 days before her 98th birthday. She was the beloved wife of Fr. Hadzi Alexandar Radenkovic of blessed memory, and the mother of the late George Radenkovic.
She is survived by her grandchildren: Alex Radenkovich, Ksenija Radenkovich and Gina (Wayne) Gant and four great grandchildren: Talon Gant,  Natalija Gant,  Nemanja Radenkovich and Anastasia Radenkovich; and former daughter-in-law Nadezda Radenkovich.She is also survived by her Goddaughter Branislava and Godchildren Sava Jakov, Kristina  & Luka Cirakovic.Protinica Gina was born on March 19, 1921 in Sabac, Serbia.

Gina attended Zemun High School in Serbia and graduated from the Merchant Academy in Belgrade, Serbia. She was married in 1940 in the Holy Archangel Michael Cathedral in Belgrade to Alexandar Radenkovic. They lived in Serbia, Hungary, Germany and France before moving to United States. They served the St. Demetrius Serbian Orthodox Church in Akron, OH and the St. George Mission Parish in Naples, FL. She and Fr. Alexandar were founders of many churches during their lifetime, despite the many challenges during the WWII and communist persecution. They stayed united and faithful servants of the Lord Jesus Christ including being founding members of St. Katherine Greek Orthodox Church in Naples Florida. Extremely proud of her Serbian ancestry, Gina dedicated her life to being a loving Protinica, trusted friend and advisor to so many people during her lifetime. She spoke six languages fluently and was able to connect with so many people who always enjoyed her elegant company.After moving to United States, Presvytera Gina opened a Bridal Boutique in Ohio since she had a gift for fashion and elegant apparel. As a gifted artist she offered many of her oil paintings as unique gifts to her friends and family.She wrote and published a book describing her amazing life story - full of challenges in wartime Europe - but with her strong faith in Jesus Christ, she managed to overcome all the difficult obstacles and was known as a pillar of faith who inspired many.
Protinica was buried out of St. Katherine Greek Orthodox Church in Naples, where she was cherished as an endeared Prevytera. Her funeral service was celebrated by The Rev. Fr Philemon Patitsas, Rector of St. Katherine Church, who eulogized her on behalf of His Eminence Metropolitan Alexios of the Greek Orthodox Diocese of Atlanta, joined by two other clergy of theGreek Orthodox Church. The Very Rev. Milan Krstic, Dean of the St. Petersburg Deanery, spoke on behalf of the His Grace Bishop Irinej of the Serbian Orthodox Diocese of Eastern America. Also serving were the Very Rev. Uros Ocokoljich, Administrator of the Parish in Naples, and the Rev. Aleksandar Djurdjevic of North Port.
May her memory be eternal! 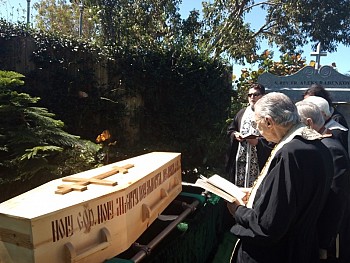