The final day of the Sts. Sebastian and Mardarije Institute began as clergy and laity arrived for the morning Matins served by Fr. Daniel Kirk, followed by breakfast. Afterwards, Bishop Maxim announced the beginning of the next talk which would be a combination of the morning and afternoon talks: God Views Us through Love and Becoming Human Today.

God’s will, the bishop noted, keeps the world in existence for out that will – that is, His love – He created man. Subsequently, God cannot be known in a different manner other than through one’s freedom. When a person comes to be acquainted with someone they at that the same time enter into a relationship with them. If we come to know a person solely based on a mental file, that is, based on their natural qualities, their physical characteristics, we will realize that these characteristics exist in other people around us. Yet, out of our love for a person, regardless of their characteristic, that person becomes an absolutely unique being. This is how God wishes to be known. When we form a personal relationship with God out of love He becomes vital to our life and our very existence. It’s through that personal contact that everything around us is viewed differently.

Ancient man, the Greek and the Latin, varied in their way of thinking. For instance, the Latin would see something and immediately think logically – view it logically – in order to put it to use. The Greek, on the other hand, would view something and ask himself what the essence of that particular thing is. Therefore, while the western mind was prone to organization the eastern mind focused on adornment. This is how the world – the cosmos – is viewed, that is, in order to make it beautiful by giving it order.

A musical program featuring Popadija Biljana Bojovic preceded lunch while the presentation of certificates followed. The Institute participants, many of whom were visiting from the East Coast, including 22 clergy from the Eastern American Diocese of the Serbian Orthodox Church, were given the afternoon free of obligation for sightseeing and fellowship. Thus, this year’s Institute ended with clergy bidding one another farewell until the next nationwide church event which, in fact, Fr. Nicholas Ceko announced on behalf of the president of the Episcopal Council His Grace Bishop Longin. Namely, the Clergy-Laity Sabor which will be held July 13-14 in Chicago, Illinois. 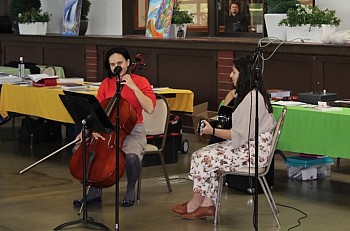