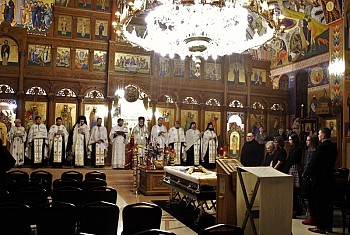 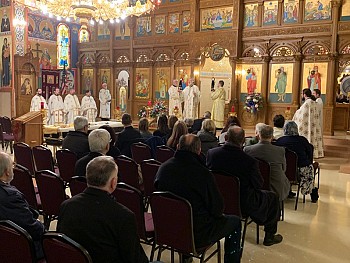 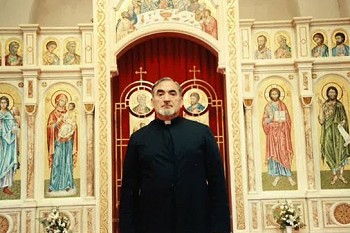 Rev. Protojerej Stavrofor Zvonimir Lazar Kotorcevic passed away on February 7th, 2019 at the age of 79. He was born on March 24th, 1939 in Urosevac, Kosovo, Srbija to the late Lazar and Jelica (Radivojevic) Kotorcevic. Fr. Zvonko was preceded in
death by his parents Lazar and Jelica, brother Blagoje, and daughter Jovanka. He is survived by his devoted wife of 50 years Protinica Desa (Pavicic), loving children Tatijana (Milan), Grigorije, and his cherished granddaughters Simonida and Sofija, brother Aleksa of Belgrade, Srbija, sister-in-law Velika of Krusevac, Srbija, many nephews, nieces, family, Kumovi, and friends.
Father Zvonko finished primary and secondary school in Urosevac, and after graduation from high school he enrolled at the Serbian Orthodox Seminary of Saints Cyril and Methodius in Prizren, Kosovo, Srbija. Also known as Prizrenska Bogoslovija. While a seminarian Fr. Zvonko fulfilled his obligation to his country serving in the army in Niš, Srbija. After serving for two years he returned to seminary to complete his studies graduating in 1962. Upon his graduation from seminary Fr. Zvonko spent the following two years at the monastery of Sveti Stefan Decanski serving as a guide for the monastery.
In 1964, Fr. Zvonko left his beloved Kosovo for Greece where he lived until August of 1965 when he emigrated to the United States. He arrived in Paterson, New Jersey on August 27th, 1965. After spending a year in Paterson, Fr. Zvonko moved to Pittsburgh, Pennsylvania where he began his graduate studies at the University of Pittsburgh. From there he continued his studies at St. Vladimir’s Seminary in Yonkers, New York to focus on the English language before finally, ending up in Cleveland, Ohio in May of 1968. It is in Cleveland where Father Zvonko met his future wife Desanka Pavicic. They were married on April 19, 1969.  Fr. Zvonko was ordained to the Holy Diaconate on December 21, 1969 at St. Nicholas Serbian Orthodox Church in Hamilton, Ontario, Canada, and to the Holy Priesthood on December 28th at St. George Serbian Orthodox Church in Lorain, Ohio by His Grace Rt. Rev. Dr. Sava Vukovic of blessed memory.
Fr. Zvonko was assigned to his first parish, St. Luke Serbian Orthodox Church, a missionary parish, in Washington. D.C. from January 1970 until December 31st, 1972. The next chapter of his life began in Akron, Ohio in January of 1973 at St. Archangel Michael Serbian Orthodox Church. It is here that Fr. Zvonko continued his graduate studies at Kent State University, where he and Protinica Desa raised their three children, and where he gave of himself endlessly for 19 years. Together with his parishioners they purchased the property on Pickle Road and under his guidance they built the church, church hall, and picnic grounds. On October 17th, 1987 at the consecration of the new church Fr. Zvonko was elevated to the rank of Protojerej by His Grace Rt. Rev. Dr. Sava Vukovic of blessed repose. He remained at St. Archangel Michael until May of 1992. After leaving he served at Sts. Peter and Paul Serbian Orthodox Church in the New Gracanica diocese for several years; then at New Marcha Monastery before, finally, returning to St. Archangel Michael Serbian Orthodox Church after his retirement. He was bestowed the cross and elevated to the rank of Protojerej Stavrofor on April 18, 2010 by His Grace Rt. Rev. Dr. Mitrophan.
Share This: