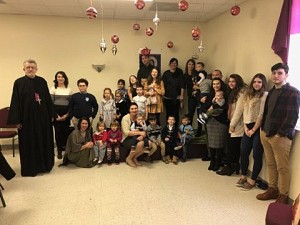 The Serbian Orthodox Church of St. George in Cincinnati, Ohio has once again traditionally celebrated Saint Sava. Our people who live far from their homeland have proved once again that they unselfishly preserve the tradition of Saint Sava. Saint Sava, the founder of education and the first Serbian archbishop, is one of the most important figures of Serbian history and is celebrated on January 27th.

The Celebration began with Divine Liturgy, led by Protopresbyter Stavrophor Petar Petrovic with Nancy Helbich leading the choir. On the day of the first Serbian archbishop, about one hundred parishioners, including children, visited the church of Saint George in Cincinnati, Ohio. Father Petar reminded all present of the great legacy left by Rastko Nemanjic, the youngest son of Stefan Nemanja. Saint Sava, the holy monk, the first archbishop of the autocephalous Serbian Orthodox Church was a diplomat, a lawmaker, a writer, and who is considered one of the greatest and most significant personalities of Serbian history. Father Petar also emphasized that wisdom and goodness are the most important traits in addition to love, and that the example of a great saint best illustrates how to be wise and good. The blessing of the Slava Bread (Slavski Kolach) followed and the day finished with the commemorative Saint Sava program by our children. “We celebrate the feast of the blessed Saint modestly as Saint Sava himself lived," Father Petar remarked during his sermon.

This year's hosts of the Saint Sava celebration were Djordje, Jela, Mirko, Djuka, Pavle, and Danilo Sebez, who prepared a delicious lunch. Sponsors of the gifts for children were Predrag, Danijela, Marko, Angelina, and Andrijana Peric. The Church also donated to every child present the booklet St. Sava Magazine, a publication of our Eastern American Diocese. The hosts for the next year will be Milan, Nevenka, Novak, and Luka Sajkovic.

Saint Sava as a school Slava has been celebrated since the 19th century. According to some data, a school fund was established in Zemun in Serbia in 1812, which stipulated that Saint Sava be marked as a protector of Serbian schools. Furthermore, in 1840, it was decided that the saint be declared a school Slava. The tradition was celebrated until 1945, when it was abolished by the decision of the Communist authorities. The tradition was restored in the early nineties.

LIFE OF THE SAINT

Saint Sava was the first Serbian archbishop, saint, and enlightener. Sava was born in 1174 AD as Rastko Nemanjic, the youngest son of Raska Mayor Stefan Nemanja. At a very young age, around year 1191 AD, Rastko went to the Holy Mountain (Mt. Athos) and after a short stay in the Russian monastery of Saint Panteleimon, moved to Vatoped. It is not known reliably in which the monastery he settled in. In Nicaea, in 1219 AD, the Byzantine Emperor Theodore and Laskaris and the patriarch Manojlo I of Constantinople granted the autocephaly to the Serbian Church, whose seat was located in the Zica Monastery.

He wrote for Karea (for his cell in Karea) Hilandar and Studenica tipykon, and the life of Saint Simeon. In Studenica, in 1209, he founded the first hospital in the Serbian state. For the church and the state, he compiled the Serbo code of civil and church regulations, selected from the Byzantine legal literature - Legislation. Together with his father Stefano, who was ordained as the monk Simeon, Saint Sava founded Hilandar Monastery and built another 14 monasteries and became the founder of the first Serbian spiritual community on Mount Athos. He also wrote a hagiography about his father, Saint Simeon the Myrrh flowing.

Saint Sava was also remembered as a skillful statesman and diplomat. In 1206, he transferred his father's relics from the Holy Mountain to Studenica and settled over their wretched brothers Vukan and Stefan. Rastko was ordained as a monk on Mount Athos despite strong opposition from parents who set aside his royal mission. By his enthronement for the Archbishop in 1219, the independent Serbian Orthodox Church was founded. 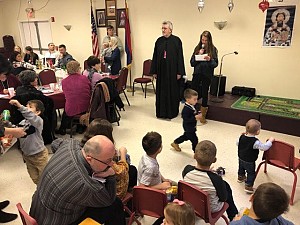