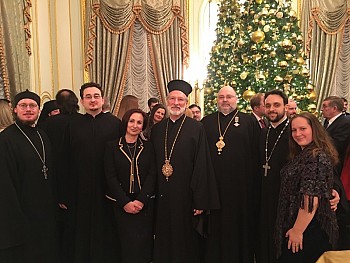 His Excellency, the Honorable Sergey K. Ovsyannikov, Consul General of the Russian Federation in New York, and His Grace Bishop Matthew of Sourozh, Administrator of the Russian Orthodox Patriarchal Parishes in the USA, cohosted a traditional Orthodox Nativity and New Year Reception at the Russian Consulate General in New York on Tuesday, January 15, 2019. The same day was also the feast day of St. Seraphim of Sarov and Bishop Irinej’s 25th Anniversary of Ordination to the Holy Diaconate.

This annual reception is held at Christmastide for members of the Orthodox Consular Corps, Orthodox Hierarchs and clergy, and distinguished members of the Russian Community. Representing the Serbian Orthodox Church was His Grace Bishop Irinej of Eastern America, accompanied by the Very Rev. Dr. Zivojin Jakovljevic, Chancellor of the Diocese of Eastern America. Her Excellency Mirjana Zivkovic, Consul General of the Republic of Serbia, represented the Serbian Nation. Thus manifesting the traditional ties between the Russian and Serbian Churches, Nations and peoples, sharing the same Orthodox Christian faith, Slavic blood and languages.

Following welcome addresses and festal greetings by Consul General Ovsyannikov, and His Grace Bishop Nicholas of Manhattan, representing the Russian Orthodox Church Outside of Russia, the gathering was treated to the resplendent sounds of Orthodox Christmas music in the Russian Tradition, by a outstanding male chorus. Following the concert, the Nativity troparion was joyously sung by all present as a bountiful and well laden festal table was blessed by His Grace Irinej for the enjoyment of those in attendance. 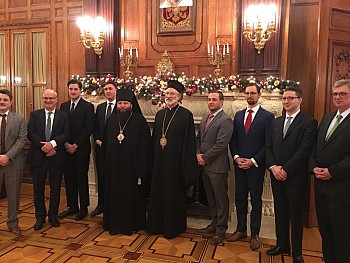