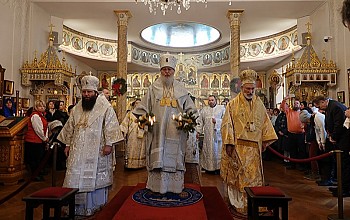 Despite its being a weekday, the church was full of worshippers for the radiant feast: Russians, Ukrainians, Americans, Serbs and many other nationalities. Singing prayerfully at the service was the expanded Synodal Choir under the direction of conductor Peter Fekula.

Two priest confessed the parishioners – one Russian and one Serbian – and a majority of the faithful communed of Christ’s Holy Mysteries.

At the conclusion of the Liturgy, Abbot Tikhon read aloud the Nativity Epistle of Patriarch Kyrill of Moscow and All Russia.

Metropolitan Hilarion greeted Bishops Irinej and Nicholas, congratulating the clergy and faithful with the Feast of Christ’s Nativity and expressing his joy at Orthodox Serbs and Russians praying together on this holy day.

"And despite the fact that we do not have a place of our own, we have you, your love, this cathedral," said Bishop Irinej. "We hope that, once we have a roof above our heads once more – our restored cathedral – we will be glad to pray there and to commemorate this family that you have become for us, and to remember the friends that we have gained in the clergy and faithful of the Russian Church Abroad."

"Thank you for keeping the Faith, for preserving your national identity and the values of Russian society, despite finding yourselves so far from your historic homeland."

The Russian Cathedral Sisterhood and Serbian Cathedral Circle of Serbian Sisters organized a festal luncheon for the clergy, parishioners, and visitors, during which filial interaction continued. In the words of Bishop Irinej: “One Faith, one Church, one Family!” 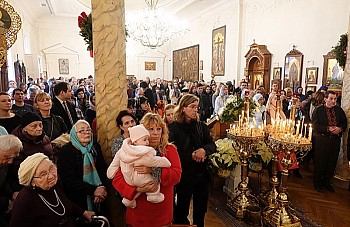