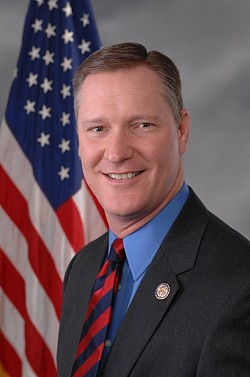 (New York) On January 2, 2019, His Grace Bishop Irinej, on behalf of the Diocese of Eastern America of the Serbian Orthodox Church, extended warm congratulations and heartfelt gratitude to Congressman Steven Ernst ‘Steve’ Stivers (R-OH) as he began his new role as co-chair of the Congressional Serbian American Caucus.

The Bishop expressed his confidence that under his leadership, the Caucus will continue its important work bringing the United States and Serbia closer together by affirming shared values and historic ties as a firm foundation upon which future relations should be established.

Steve Stivers is currently serving his fourth term as a Member of Congress and represents Ohio’s 15th Congressional District. Prior to running for Congress, Stivers served in the Ohio Senate. Stivers received both his bachelor’s degree and his MBA from The Ohio State University and resides in Columbus with his wife, Karen, and children, Sarah and Sam.

A career soldier, Stivers has served over 30 years in the Ohio Army National Guard and holds the rank of Brigadier General. Stivers received the Bronze Star for his leadershipinOperation Iraqi Freedom in Kuwait, Iraq, Qatar and Djibouti where he led 400 soldiers and contractors and every one returned home safely to the United States.

In conclusion, His Grace noted that the Diocese of Eastern America, its parishes under his episcopal care, and Serbian-American organizations from across the country look forward to the prospect of working with Congressman Stivers and the entire Caucus.