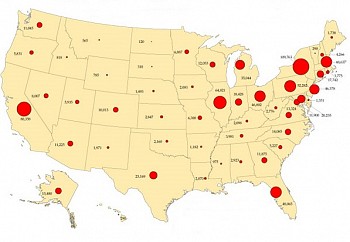 “Fast Questions and Fast Answers about the Geography of Orthodoxy in America”, the second essay in a group of mini-reports concerning Orthodox Church life in America, was released by the Assembly of Canonical Orthodox Bishops of the United States of Americaon Wednesday, December 5, 2018.

The report offers interesting facts about the geographic distribution of Orthodox Christian parishes and Church members in America and answers a variety of questions, including

The study is illustrated with 12 geographic maps in color.  Its author, Alexei Krindatch, may be contacted at akrindatch@aol.com.

Future mini-reports will delve into such topics as ecumenical attitudes and Church attendance among American parishes and faithful, young adult parishioners, and Orthodox students in American colleges and universities.