Singing to the accompaniment of the Gusle 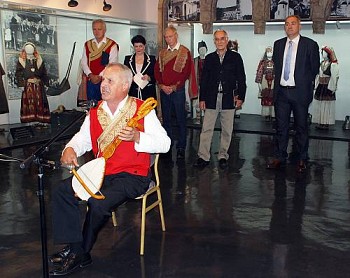 As stated in the official UNESCO’s report, Singing to the Accompaniment of the Gusle was inscribed on the Representative List of the Intangible Cultural Heritage of Humanity in 2018.
During the thirteenth session of the Intergovernmental Committee for the Safeguarding of the Intangible Cultural Heritage that took place at Port Louis, Republic of Mauritius, from Monday 26 November to Saturday 1 December 2018 at the Swami Vivekananda International Convention Centre (SVICC), it was decided that Singing to the Accompaniment of the Gusle will enter UNESCO’s List of the Intangible Cultural Heritage of Humanity. Over the six days, the twenty-four States Members of the Committee, elected by the General Assembly of the 2003 Convention, have discussed a number of issues that are important for the safeguarding of living heritage around the world. On this occasion, the agenda of the meeting included the issue “Inscriptions on the Lists”, which led to the expansion of the List of the Intangible Cultural Heritage.
Singing to the Accompaniment of the Gusle was nominated for inscription on the Representative List of the Intangible Cultural Heritage of Humanity in 2017, along 39 other nominated proposals, and during the examination of nominations process, the Committee representatives have made the decision for this performing practice to enter the aforementioned UNESCO’s List.
The proposal for the nomination process included the following short description of the element: “Singing to the accompaniment of the gusle is a performing practice that includes solo singing of folk epic decasyllabic poems, performed by a singer to the accompaniment of the gusle, a one-stringed (exceptionally two-stringed) bowed string instrument. In the past, both the poetic texts and the musical component of guslar songs were transmitted orally, whereas today, the presented texts mostly include the well-known, written ones, while the musical component is shaped through improvisation. This archaic form of folk art promotes the highest ethical values, the importance of kinship and the homogeneity of the community, and it is also a blend of the community's historical memory and traditional music skills. The communities that practice it considers it the most representative element of their identity.”
UNESCO’s Official Website has recently created a page that describes the Singing to the accompaniment of the Gusle as a performing practice.
Singing to the accompaniment of the Gusle – a simple string instrument – is an ancient art of performing primarily heroic epics practised for centuries as a form of historical memory and an expression of cultural identity. Performances involve a complex form of interaction between the audience and performer and are based on the skills and creativity of soloist artists (guslars): the guslars’ ability to dramatize poetic content, body language and charisma are key for successful performances. The repertoire includes songs predominantly about mythical and historical heroes, events from the legendary past, ancient or recent history and, less commonly, ballads and humorous songs. Stage performances take place locally, at festivals, and as part of commemoration practices. Covering a wide range of topics, the songs reflect the value system of the community and their interactive character fosters community feeling. Most modern guslars acquire the basic singing and playing skills from more experienced players in their family, local community or a guslar association, but the skills are also transmitted in public music schools. Local organizations are assembled around the Union of Guslars of Serbia, whose efforts have resulted in the establishment of the Festival of Young Guslars and the Assembly of the Young Guslars of Serbia. 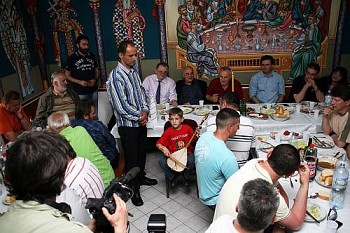