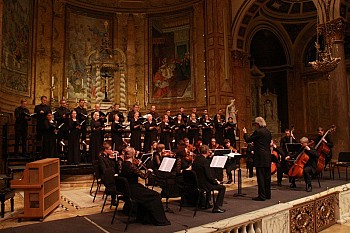 His Grace Bishop Irinej of Eastern America and His Beatitude Metropolitan Tikhon of the Orthodox Church in America joined a sold-out crowd for Arvo Pärt: The Sound of the Sacred. The audience was privileged to hear some of the leading performers of Arvo Pärt's music in the world, the Estonian Philharmonic Chamber Choir and Tallinn Chamber Orchestra, conducted by Tõnu Kaljuste. The all-Pärt program included two major compositions inspired by St. Silouan of Mount Athos, as well as a new setting of the Prayer from the Kanon of Repentance performed for the first time in the United States.

“Further evidence of the power of Arvo Pärt’s music and its relevance for the contemporary concert-goer was given tonight,” said Dr. Nicholas Reeves, who co-founded the Arvo Pärt Project when he was a professor at St. Vladimir’s Seminary. “It has been four years since the Estonians performed in New York and, regardless of the repeated programming of certain compositions, Pärt’s sway over the audience is as strong, if not stronger—the attendance, applause, and overall spirit of eagerness to listen was self-evident, even the pre-concert lecture was virtually packed. The depths of Pärt’s works and how they relate to his faith are an endeavor that the Arvo Pärt Project will continue to provide for a metropolitan populace thirsting for life-giving water.”

Elder Zacharias of Essex—one of the living elders of the Orthodox Church—to take part in a free pre-concert lecture on St. Silouan and repentance in the music of Arvo Pärt. Archimandrite Zacharias is a disciple of St. Silouan’s own disciple Elder Sophrony, and is a monk in the community founded by Elder Sophrony, the Monastery of St. John the Baptist in Essex, England.