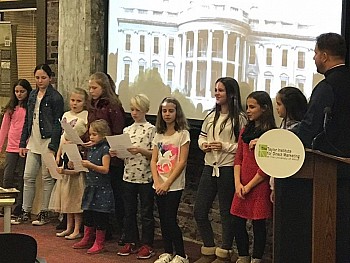 With the blessing of His Grace Bishop Irinej, and through the efforts of Dr. Vanja Zoric, Akron University hosted the traveling visual-literary exhibition, “Over There, So Far Away”. This presentation was planned through the combined efforts of Protonamesnik Dragan Goronjic, Dean of the Cleveland Deanery and parish priest at St. Demetrius Serbian Orthodox Church, and Protonamesnik Aleksa Pavichevich, parish priest of St. George Serbian Orthodox Church.

Professor Dr. Vanja Zoric, speaking to a crowd of people at Akron University’s Polasky Hall, offered her personal reflection on the impact of her Serbian heritage on her life.  “Our culture, our history, and our background help us understand who we are.”

Dr. Zoric proudly shared an audio-visual presentation that discussed not only the important role of Serbia in the First World War, but also the important role of the Serbian people in world history, with a focus on Nikola Tesla and Mihajlo Pupin.  Throughout her presentation, she consistently reminded the audience of the importance an individual’s heritage, and she delighted in those people gathered that wanted to learn more about where they came from and the history of their people.

The second presentation was offered by Professor Ljiljana Ignjatovic who offered a thorough history of the Serbian role and sacrifice during the First World War.  The courage and bravery of the Serbian people were evident in her discussion.  Relative to their population, as Professor Ignjatovic reminded the audience, no nation suffered greater losses.

Fr. Dragan Gronjic framed the evening in faith, beginning and ending the event in prayer.  As a gracious host, he offered a warm welcome to each of the esteemed presenters, giving thanks for all those who attended the Friday evening event on October 26th.

The event closed with a performance by a combined children’s choir from St. Demetrius in Akron, together with children from St. George in North Canton. Their young voices offered the beautiful hymn from the First World War, “Tamo Daleko”, much to the delight of the audience.

During a cocktail hour after the presentations, those in attendance enjoyed the marvelous, educational visual-literary exhibit presentation entitled, “Over There, so Far Away”.  The beautiful panels with news and images from the First World War were of great interest to all those gathered at Akron University.

This event was a wonderful opportunity to share the rich history of the Serbian people and their contributions to not only the war effort, but to science and culture as well. 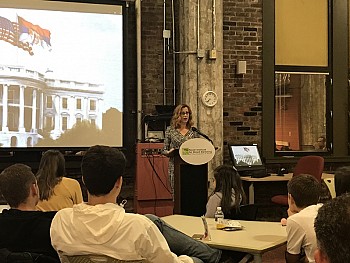