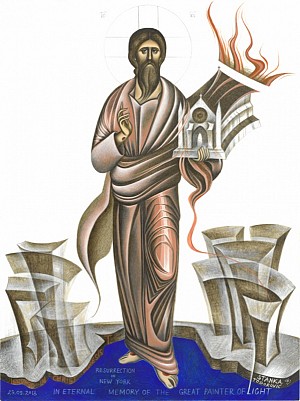 On the 23rd of September 2018, we commemorate six months since Stanka Todorovic, a contemporary Serbian artist, reposed in the Lord. On this occasion, we wish to share with you a distinct expression of love, an icon, painted by her son, artist and iconographer, Dr. Uros Todorovic, specifically in eternal memory of Stanka’s life and work. The depicted theme relates to the well-known destruction of the Serbian Orthodox Cathedral of St Sava in New York City, which happened on Easter of 2016. Simultaneously, it makes an unassuming specific reference to the manifold trials that Stanka underwent, especially during the last three years of her life (2015 -2018).

As her name implies in Serbian (Stanka = the one who stands as immovable), she carried her cross humbly but did not give in to any of the many challenges that were ominously striving to endanger her very existence, as well as her lifework.  She stayed truthful and rigorously real until her last breath, which was not easy and which also coincides with her authentic path as an artist.

In the icon, the Resurrected Christ picks up the burning church from Manhattan and takes on its fire wondrously, without fighting it. His body appears to resemble a different kind of otherworldly flame, like the one which believers witness in Jerusalem every Easter. This otherworldly flame absorbs the worldly fire of the burning church and cuts it off, as observed in the detail above the church. A somewhat inconspicuous reference is made to the three youths in the furnace, Shadrach, Meshach, and Abednego (Book of Daniel). King Nebuchadnezzar saw a fourth figure in the flames and said: “But I see four men unbound, walking in the midst of the fire, and they are not hurt; and the appearance of the fourth is like a son of the gods”.

We become ignited in Christ in view of His resurrection which extinguishes death and destruction. Christ brings back the restored or rather resurrected Church, which is all of us as one body.

May +Stanka’s memory be eternal! 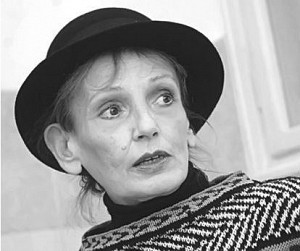