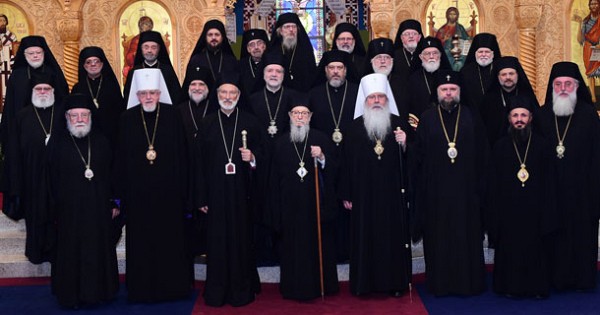 CLEVELAND, OH – The Assembly of Canonical Orthodox Bishops of the United States of America convened its ninth annual meeting today in Cleveland, Ohio. The day began with a celebration of the Divine Liturgy at St. Sava Serbian Orthodox Cathedral in Parma, Ohio.

His Eminence Archbishop Demetrios, Geron of America, Chairman of the Assembly, opened the meeting with a prayer. His Eminence Metropolitan Gregory of Nyssa, Secretary of the Assembly, took the roll call. Twenty-five hierarchs were present. Prior to the meeting, the hierarchs of the Russian Orthodox Church Outside of Russia notified the Chairman that they have suspended their participation in the Assembly in light of events currently ongoing in Ukraine.

After the roll call, Archbishop Demetrios offered his opening remarks. Recalling the words of the Apostle St. Paul to the Corinthians, “A great door for effective work has opened to me, and there are many adversaries (1 Cor. 16:9),” His Eminence continued “The door is open, but there are many adversaries for us, too.   Many challenges. This is why it is vitally important to be together, to act together, to strengthen the work of this Assembly.” He went on to express his sorrow at the absence of the Brothers of the Moscow Patriarchate and said, “given the various difficult matters of ecclesiastical and geopolitical significance our Mother Churches are dealing with, I take this opportunity to emphasize the need, now more than ever, for our Assembly to strengthen our relationships and continue our essential work serving the Orthodox faithful of this country.”

After approval of the agenda and last year’s meeting minutes, Archbishop Michael, Treasurer of the Assembly, presented his financial report and proposed budget. The treasurer encouraged the hierarchs to continue to support the Assembly financially.

The Secretary gave a brief update on the activities of the Assembly’s committees in 2018. The Secretary, who serves as the liaison for Orthodox Christian Fellowship (OCF), emphasized the importance of OCF reaching out to Orthodox college freshmen during their first 40 days on campus, to engage them in the life of the Orthodox Church while at college. He called on the hierarchs to help OCF’s efforts by encouraging parishes to submit the names of matriculating college freshmen so that OCF can contact them.

At the conclusion of the business session, two guest speakers, Rev. Dr. Alkiviadis Calivas, Professor Emeritus of Liturgics at Hellenic College Holy Cross School of Theology, and V. Rev. Dr. John Morris, Ph.D., Pastor Emeritus, presented to the hierarchs on the topic of baptism, chrismation and the reception of converts. The speakers emphasized the diverse practices across jurisdictions and even amongst hierarchs. The discussion revealed that this delicate matter must be researched further by the Assembly in order to arrive at a pastorally sensitive yet canonically appropriate response.

(Wednesday, October 03, 2018) - The Assembly of Canonical Orthodox Bishops of the United States of America convened in Cleveland, Ohio today for the second day of its ninth annual meeting.

During the morning session, the Hierarchs discussed ways to support cross-jurisdictional cooperation among parishes at the local level. The Hierarchs issued the following statement in that regard:

“The Assembly of Canonical Orthodox Bishops of the United States of America is committed to encouraging spiritual unity, communication, and cooperation among the parishes of various jurisdictions situated in the same geographic areas. The work of local clergy brotherhoods is a critical part of this process of achieving greater unity. In particular, the Assembly encourages all parishes to engage in joint liturgical events, educational activities, and outreach ministries, with respective hierarchical blessings.”

The Hierarchs endorsed the upcoming Orthodox Camping and Youth Worker Conference to be held January 23-26, 2019 at the Antiochian Village. His Eminence Metropolitan Gregory of Nyssa, Secretary of the Assembly, strongly encouraged the participation of youth workers in the conference.

In the afternoon session, the Hierarchs discussed an assessment of the Assembly’s accomplishments and challenges over the first nine years and began to identify some specific future objectives and priorities to achieve over the next several years. The Hierarchs reaffirmed their commitment to the mission of the Assembly and their desire to reinvigorate its work.

Message of the Annual Assembly

Beloved Brothers and Sisters in the Lord,

We, the members of the Assembly of Canonical Orthodox Bishops of the United States of America, gathered in Cleveland, Ohio, for our ninth annual meeting on October 2-3, 2018, greet you all with love in Christ as we offer glory and gratitude to Him.

Twenty-five Hierarchs assembled in order to remember and reaffirm our unity in the Orthodox faith. We express our deep gratitude to all those who planned and prepared for this year’s Assembly. The Assembly opened with the celebration of the Divine Liturgy at St. Sava Serbian Cathedral. We extend special appreciation to our host, Bishop Irinej, and the community, especially the Circle of Serbian Sisters, for their hospitality.

Once again, we called to mind our brother Hierarchs kidnapped in Syria, the Greek Orthodox Metropolitan Paul Yazigi (brother of His Beatitude Patriarch John X of Antioch) and the Syriac Orthodox Archbishop John Ibrahim.

In the opening session, the Chairman, Archbishop Demetrios of America, delivered his keynote address, which can be found on the Assembly’s website. The officers of the Assembly, Metropolitan Gregory (Secretary) and Archbishop Michael (Treasurer) also presented their official reports.

Afterward, the staff of the Assembly ministries and Chairmen of the Assembly committees offered an overview of their work during the last year. The assembled Hierarchs discussed how to further support these ministries as well as how to strengthen the organization and effectiveness of the committees. We heard presentations from Rev. Dr. Alkiviadis Calivas, Professor Emeritus of Liturgics at Hellenic College Holy Cross School of Theology, and V. Rev. Dr. John Morris, Pastor Emeritus. They presented on baptism, chrismation and the reception of converts. Metropolitan Gregory presented highlights of the study entitled “Go and Make Disciples: Evangelization and Outreach in US Orthodox Parishes (Part 1).” Archbishop Nicolae, Chairman of the Committee on Canonical Regional Planning, presented a summary report of the study entitled “Places of Greater Orthodox Unity in America: State of Local Parish-to-Parish Inter-Orthodox Cooperation and Communication.”

After due deliberations on the role and responsibility of the Church in contemporary society, we reached the following conclusions, which we convey to our communities throughout America:

In conclusion, we extend our paternal prayers for all of our faithful. May the abundant blessings of our all-merciful God be with you all.

Grow in the grace and knowledge of our Lord and Savior Jesus Christ. To Him be the glory and the dominion now and to the day of eternity (2 Peter 3:18).