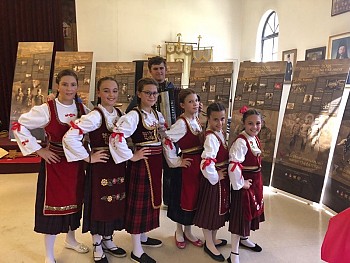 With the blessing of the His Grace the Right Reverend Irinej, Bishop of Eastern America, on September 15, we celebrated the 100th anniversary of Serbia and the United States in World War I.

Thanks to the city of North Port and the representatives of the government Jill Luke, Commissioner, and Linda Yates, Vice-Mayor of North Port, FL, that supported us at the celebration on the historic occasion of commemorating the centennial of President Woodrow Wilson’s "Proclamation" of the Day of Prayer for Serbia and The Day the Serbian Flag flew at the White House, on July 28, 1918 and the centenary of the breakthrough of the Thessaloniki Front, on September 15, 1918, which was the decisive maneuver for the collapse of the Central Powers in the World War I. The visual-literary exhibition “Тамо далеко: 1918-2018” / “Over There, So Far Away” which was set up in Washington on the celebration of the Day of Prayer for Serbia, from 25 to 29 July 2018, was presented to the participants of this magnificent gathering in the Church of St. Sava in North Port.

With the blessing of the His Grace Irinej and in cooperation with the Department for Christian Education of the Eastern American Diocese of the Serbian Orthodox Church and its director, Protodeacon Dr. Jovan Anicic, and non-profit organization, Art Exchange, Ms. Svetlana Rogic, founder and director, with the mediation of Fr. Sasa Djurdjevic, an exhibition of the Association for Preservation of Tradition and Cultural Heritage of the Valjevo Region and the Tipon Agency from Belgrade, and the author of the exhibition by designers, Marinko Lugonja and Dr. Marko Kentera, translated by Dr. Zorka Milic, will be presented in many parishes of the East American Diocese.

This celebration could not have passed even without the famous Serbian American accordionist Mirko Roknich, who played the anthems of America and Serbia and opened this wonderful event with its famous and enchanting accords.

The event was magnified by the maestro Petar Maric, winner of the world cup in electric accordion, who left the audience breathless with the echo of applause, performing modern, classical and traditional ethnic music monitored by his colleague Professor Bratislav Manasijevic.

Alexei Blagonadezhdin, a self-taught accordionist, who also accompanies the Serbian Pearls Folklore Group and Milunka Savic Children's Choir of the St. Sava parish in North Port, fulfilled his love and hope with his performance of the songs of Kosovo, knowing that the Church of St. Sava has a future.

With his spectacular five-point performance, Serbian Pearls Folklore, he performed with the middle and younger group, knowing how to bring joy to the audience who enjoyed the dance and songs.

Anastasia Djurdjevic, recently came from the town of Valjevo, which through the history of the Serbian genus suffered and gained fame in World War I, serving as the City of Hospitals, sang the well-known song, ‘The French Ship is Embarking’. Many battles were fought around Valjevo, such as Kolubarska Battle, Cerska, Battle of Mackov Kamen, even the famous ‘March on the Drina’ was composed there.

The Children's Choir of the Church of St. George in Clearwater sang the song, “Тамо далеко - “Over There, So Far Away".

We heard the sounds of the trumpet, and for a moment, we were transported to Guca! Thirteen-year-old, Stefan Dedic, even played the melody line of the song, “Тамо далеко - “Over There, So Far Away".

The Ballet Group at the Church of St. George from Clearwater, accompanied by a song of the Children's Choir, entitled "The March of King Peter’s Guardsmen", performed the choreography of Professor Dusanka Ivanov, presenting ballerinas Savina, Sophie, Ana, Jelena and Angela.

“Djurdjevak” Folklore Group from Clearwater, with their original performance, connecting the innovation of youth with the experience of adults, contributed to the celebration and the day of America and Serbia in the North Port, FL.

The program was announced and led by Milica Antic and Natalija Nikolic.

That which adorned this event was the gathering of a large number of families, who came to see their children making such a great contribution to this gathering: folklore members, ballerinas, musicians, and singers.

Therefore, we owe a great debt of gratitude to not only their parents and teachers, but also to the churches of St. Sava from St. Petersburg and St. George from Clearwater, as well as the faithful people of Tampa Bay, without whom this ceremony would not have been be such a successful celebration. Several parents echoed that the celebration seemed like a family holiday!

Finally, many thanks to His Grace Bishop Irinej, who blesses us abundantly and support us in all our efforts, and has testified about this magnificent event, The Day of Prayer for Serbia, saying: : "We Serbs from the United States, knew that the flag of Serbia was erected over the White House. It was a unique case in the history of America. Bishop Irinej even testified at a Helsinki Hearing before the Senate, July, 1999, quoting the Proclamation of the President of USA, Woodrow Wilson. Thereafter, Dr. Philip Hart, historian and co-author of Serb World USA, investigated this event to verify its credibility.

Thank you very much to our dear priests and their families and the parishes, thank you very much, Clearwater, St. Petersburg, North Port and faithful people. And, thank you very much to the dear children who played, sang, and rejoiced. Finally, it was a great honor for our St. Sava community in North Port, that these lovely ladies, Jill and Linda and Kevin M. Rouse, with associates and family, offered their presence in support of the celebration and remembrance of the glorious and historical moments of the American and Serbian people!!!

ON THIS OCCASION AN IDEA WAS CONCEIVED, AT THE PROPOSAL OF THE CITY OFFICES, THAT EVERY YEAR IN CONTINUITY THE PROCLAMATION OF WOODROW WILSON, AND THE DAY OF PRAYER FOR SERBIA WOULD BE HONORED!!! Thank God, to Whom it due all glory!!! 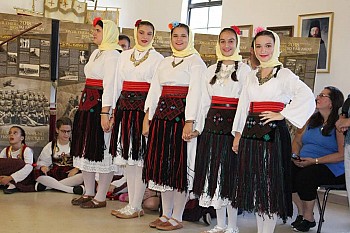 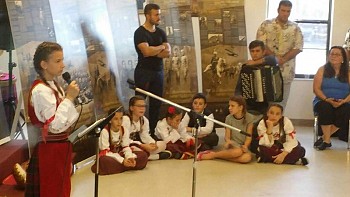