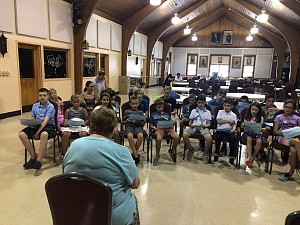 Marking the 35th year since the establishment of the summer day camp at St. Stephen Church in Lackawanna, New York, 38 children participated in the 2018 program from August 6 through August 9. Learning from their parish priest and church school teachers, participating in outings and activities, and enjoying fellowship with their peers, the children explored this year’s camp theme, Faith and Science.

On Monday and Wednesday, the campers assembled at St. Stephen Church for morning prayers followed by the daily program, including lectures, singing, crafts, and play time. Protonamesnik Vladislav Golić, parish priest, and Protinica Victoria Trbuhovich led the academic portion of the program. Father Vladislav presented historical sketches of the lives and significant accomplishments of four Serbian scientists born in the 19th century: Nikola Tesla, Mihajlo Pupin, Mileva Marić Einstein, and Milutin Milanković. Protinica Victoria provided the students a clear understanding that the Holy Orthodox Faith and science are not necessarily incompatible. However, she emphasized that scientific theories must always be held up against the divine measure of God’s plan for creation and mankind. She coordinated her discussion on God’s Creation with a craft for the younger children, and Popadija Sara Golić incorporated the reading of the first chapter of Genesis with a project for the older children. The musical portion of the program included liturgical singing as well as traditional Serbian children’s songs accompanied by games. Several parents were on hand daily to help with the crafts and outdoor games and to prepare lunch and snacks.

From its inception, the day camp has included visits to other Orthodox churches, that the children might develop an awareness of Orthodoxy beyond their own parish, and in some years, a few children from other local parishes have participated in the camp activities. On Tuesday morning of this year’s camp, the children and many of their parents met at St. George Antiochian Orthodox Church in Lewiston (Niagara Falls), New York, where they again began the day with the morning prayers. Father Raphael Barberg, parish priest at St. George, spoke to the group about the shared Faith of the Orthodox whose ancestries are from the various Slavic nations, Greece, the Arabic regions, and, in more modern times, any part of the world, including Finland, the home of his ancestors. He asked the children to identify similarities in the church of St. George to those at their own St. Stephen church. At Father Vladislav’s request, Father Raphael told the children that he had been a police officer when he converted to Orthodoxy. He used his experience in law enforcement as a reference point to discuss God’s mercy and justice.

After a snack in the outdoor pavilion on the St. George property, the families drove a few miles to the Niagara Power Vista, a facility of the New York Power Authority, where they participated in hands-on experiments on electricity and energy, designed a model dam, viewed a film on the construction of the power-generating plant at Niagara Falls, and listened to a recorded debate on Tesla’s defense of the use of alternating current versus Edison’s adherence to the use of direct current. A picnic-style meal in the facility lunch room and an ice cream treat on the way home added some social time to the day.

The final activity of each year’s camp season is a trip to a local amusement park. On Thursday of camp week, the families met at Fantasy Island, where the children enjoyed the rides and the water park. Again, the parents prepared lunch, some having brought food from home, others cooking ćevaps and hot dogs on the pavilion grill. Cupcakes were the highlight of a birthday celebration for three children. The non-Serbian speakers among the group were delighted to hear the singing of “Danas nam je divan dan” in addition to “Happy Birthday.”

With thanksgiving to God, the 2018 summer day camp at St. Stephen concluded on August 9. The summer educational program is a reminder that prayer, learning, and fellowship are a part of the Orthodox Christian’s life all year long. The topic of Faith and Science is one that the students can keep in mind when they return to their secular studies in September, serving as a basis for their understanding of contemporary scientific issues. 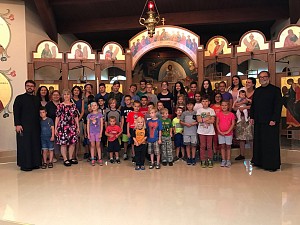