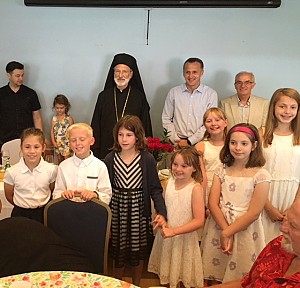 On Sunday August 26th, the St. Nicholas parish of Greater Philadelphia was blessed to be visited by our Hierarch and Father, His Grace Bishop Irinej.

Greeted by the children of the parish upon His entry into the church, His Grace celebrated Divine Liturgy with the assistance of Fr. Milorad Orlic, parish priest, and Protodeacon Milos Zdralic, Diocesan Financial Secretary. Diocesan Secretary Milovan Jovanovic attended to His Grace during the Divine Liturgy, and doctoral candidate Srdjan Maksimovic, along with the male chorus of St. Nicholas parish, chanted the responses.

His Grace gave an inspired homily in Serbian on the Gospel reading of the wicked vinedressers (Mt. 21:33-45), drawing upon St. Nicholai Velimirovich’s focus on the words: “There was a man, a householder…” His Grace reminded us of Patriarch Pavle’s constant admonition that, in this life, we must first and foremost strive to be men (i.e., fully human)- those who are endeavoring to “…come in the unity of the faith…unto a perfect man, unto the measure of the stature of the fulness of Christ” (Eph. 4:13). His Grace emphasized that no vocation, position, calling, stature or status is of any value, significance or importance, unless we are men.

His Grace then edified all present on the significance of the Serbian word for jealousy - ljubomora, which characterized the wicked vinedressers. Ljubomora is a compound of the  Serbian word “Ljubav” (Love), and the Latin word “Mortis” (Death) - the death of love in a person. This is not merely the absence of a sentiment or emotion in us, but the absence of the living God in us. For as “God is Love” (1Jn. 4:7-21), to bring about the death of love in us is to kill the presence of God in us; to compromise the image and destroy the likeness of God in which we are created, condemning ourselves to eternal estrangement from the God who is Love, and can only be communed with by those who, by God’s grace, become love.

In His homily in English, His Grace engaged the children, requesting that they “assist Deda-Vladika in explaining this parable”; differentiating between right and wrong, good and evil. With the children’s participation, His Grace explained how jealousy over who would obtain the greatest profit from the vineyard motivated the vinedressers to murder the servants sent to them and, finally, the very son of the man who was the owner. His Grace drew a comparison between a neighbor who keeps his property orderly and one who allows his property to become inundated with refuse. The latter can become so envious of the former that he may even kill him. But will that make his property neat and orderly? The children replied with an empathic “No!” Thus, continued Deda-Vladika, it is important for all of us to keep our part of the world neat and tidy and, to the delight of all parents present, we should always respond positively when Mama, Tata, Baba or Deda ask us to help clean (particularly if our rooms are the ones that need cleaning).

Upon conclusion of the Divine Liturgy, His Grace administered the Oath of Office for the new Executive Board of St. Nicholas Church. He congratulated the newly elected officers, and reminded them that it was a privilege to serve and bear the Cross entrusted to them of caring for the things of God. After distribution of naphora (antidoron), a wonderful luncheon was enjoyed by all present. His Grace took the opportunity to, once again, thank the enthusiastic response of the Philadelphia Serbian community to the celebration of the 100th Anniversary of the flying of the Serbian flag in Washington D.C., and the national day of prayer for the Serbian people as proclaimed by then President of the United States of America, Woodrow Wilson. As part of the celebrations His Grace, as Guest Chaplain, read the prayer opening the session of the House of Representatives. Normally, His Grace informed all, the guest chaplain is permitted approximately forty guests, seated in one gallery, for such an occasion. His Grace was informed that a record was set, as over eighty guests (forty-two from Philadelphia) were present for His prayer reading, requiring special permission to be obtained for a second gallery to be opened.

His Grace Bishop Irinej Presides at Pan-Orthodox Salutations to The Most Holy Mother of God at St. Nicholas Serbian Orthodox Church in Elkins Park, PA.

On a sun drenched beautiful Sunday afternoon on August 26th, 2018, His Grace was the lead celebrant for the Supplicatory Canon to the Mother of God, which the Orthodox Clergy Brotherhood of Philadelphia celebrates on the Sunday afternoons of Dormition Fast according to the Reformed and Traditional Julian Calendars. Vested in strikingly beautiful golden and blue vestments representing the sublime glory and honor of God, while also reflecting the dazzling virtue of the Theotokos, serving with His Grace were Fr. Nicholas Dellerman (Sts. Peter and Paul Albanian Orthodox Church), Fr. Victor Gorodenchyk (St. Archdeacon Stephen Orthodox Cathedral), Fr. Emmanuel Pratsinakis (St. Thomas the Apostle Greek Orthodox Church, ret.), Fr. Milorad Orlic (St. Nicholas Serbian Orthodox Church), and Protodeacon Milos Zdralic. Much of the service was gloriously sung by the Pan-Orthodox Choir of Greater Philadelphia, under the able direction of Reader Dan Drobish. His Grace, upon the conclusion of the service, expressed his delight for the glorious singing of the choir, noting their endeavor to incorporate melodies from all Orthodox traditions. Laity from the sixty parishes of the Metropolitan Philadelphia area joined in the beautiful service.  In a second inspired homily, His Grace drew the attention of all present to the hymn chanted during the Canon, “Open unto us the doors of Repentance…” - a prayer which the Bishop, or Priest, prays each time before he celebrates the Divine Liturgy, opening the Royal Doors as he prays. These doors, closed by the ancestral sin of our fore-parents Adam and Eve (more a protective measure than a punishment from God, so that humankind would not live in an eternal fallen state), are reopened for us by the Theotokos who, in the Gospel reading of the Supplicatory Canon, is both the one who is blessed as “her womb bore Him (Christ), and her breasts nursed Him” (Lk.11:27), and the one who is especially blessed for being the first to, “…hear the word of God, and keep it” (Lk.11:28).  His Grace’s choice of words, the commitment of delivery, and the contents of the homily offered the explanation of the most awe inspiring theology of the Holy Orthodox Church in words, simple and clear.

Rev’d Father Milorad Orlic, host of the gathering, and presiding clergyman of the parish,welcomed His Grace to His Grace’s parish of St. Nicholas as well as the pilgrims who gathered. After acknowledging the honorable presence of the widely acknowledged Hierarch, the clergy and choir, he invited the congregation to the Church Hall for refreshments and sustenance. After enjoying the delicious lenten fare which was prepared locally by the congregation, His Grace offered the closing prayer and wished to all those in attendance. a Blessed Holy Feastday dedicated to the Dormition of the Mother of God and safe travels as they return to their home.

Inspired by the entire event led by His Grace, we pray the our Lord offer His Grace many, many hears of health and Divine happiness, as he serves the Orthodox faithful in America and beyond. 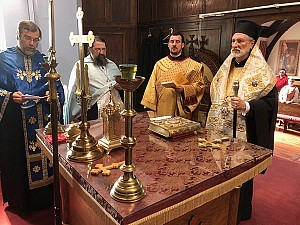