The parish of the Holy Prophet Elijah in Aliquippa, Pennsylvania festively celebrated its 104th annual parish slava on Sunday, August 5, 2018.  As with many past celebrations, this one took place on a hot and humid day under plenty of sunshine, typical of this time of year in Western Pennsylvania.  The sweltering climate could not diminish the enthusiasm of the parishioners in their celebration of their heavenly patron, the Holy Prophet Elijah, and the commemoration of the parish’s 104 years of ministry to the Aliquippa community.

This day of prayer, thanksgiving, and celebration began with the arrival of His Grace, Bishop Irinej at the front doors of the parish church a little after 9:30 AM.  Among those welcoming him were the concelebrants of the morning’s holy liturgy: Protodeacon Milos Zdralic, Secretary of the Diocese of Eastern America; Presbyter Branislav Golic, pastor of the parish; and Protopresbyter-Stavrofor Dr. Rodney Torbic, retired parish priest of St. George Serbian Orthodox Church in Carmichaels (Masontown), Pennsylvania and native son of the St. Elijah parish.  His Grace then proceeded into the temple itself, where he was met by scaffolding and other signs of renovation work that is scheduled to be completed later this year.

Many faithful already had gathered in the church to await His Grace’s entry.  Among them was the honored Kum for the Slava celebration, Rodney M. Torbic.  Rodney is the oldest son of Father Rodney Torbic and the late Roberta “Joy” Torbic, and his family has a deep connection with the St. Elijah parish that goes back to his great-grandparents in the parish’s earliest days.  Present with Kum Rodney were his wife, Molly, their sons Ryan and Kyle, and many other members of the Torbic family.

After vesting in the Holy Altar, His Grace emerged to administer the Rite of Tonsure of a Reader (“Ctec”) to Mark Knapp, a long-time altar server at the St. Elijah Church.  Mark is the son of Greg and Diane Volitich Knapp and the grandson of Djuri and Marlene Volitich, the honored Kumovi during the parish’s 103rd Slava celebration in 2017.  Beginning his altar service at a young age under the guidance of +Protojerej-Stavrofor Stevan Stepanov of blessed memory, Mark has offered dedicated and loving service to his church for several years, continuing a family tradition of support for the St. Elijah parish that dates back many decades.

After the reading of the Holy Gospel, His Grace delivered a stirring homily about the day’s reading (Mat. 17:14-23), focusing particularly on the importance of faith as demonstrated by the disciples’ inability to cure the epileptic.  This failure, His Grace explained, reflected the disciples’ attempt to work this miracle through their faith in themselves alone, and not their faith in Christ.  We, too, fail when we replace faith in the Lord with faith in ourselves.  But, as His Grace observed, the smallest amount of faith in the Lord – “faith as a mustard seed,” as Jesus put it – will enable us to work the greatest miracles.

The holy liturgy continued after the homily with the prayerful exchange of petitions by the clergy and responses led by the St. Elijah Serbian Church Choir, under the direction of Kathy Loverich.  The temple, full of faithful (including many children) who crowded in around the scaffolding, resonated with this prayerful exchange, as well as with the proclamation of the Symbol of Faith -- the Nicene Creed -- that was recited by all of the faithful in unison.  The divine service reached its climax with the Communion of the Faithful, when a large number of those gathered – ranging from infants in their parents’ arms to parishioners of many decades – approached to receive the Holy Gifts distributed by His Grace.

At the end of the liturgy, the faithful exited the church for the traditional litija and prayers around the temple’s perimeter.  By this time, the heat and humidity of the day had intensified, but the weather did not deter the clergy and faithful from completing the course.  In the last stop at the church’s southern side, prayers were said for all of the deceased founders, benefactors, and members of the parish.  Specifically commemorated were its departed hierarchs (including +Bishop Stefan Lastavica, the first diocesan hierarch of the Diocese of Eastern America and Canada who was consecrated as a bishop in the St. Elijah Church in July 1963, and who is buried in the parish’s cemetery) and its former priests, including +Protopresbyter-Stavrofor Vlastimir Tomich and +Prota Stevan Stepanov of blessed memory.  Following these prayers, the faithful joined with the clergy and choir in singing Vjecnaja Pamjat – Memory Eternal!

The litija ended in the front of the church, where His Grace blessed the beautiful Slavski Kolac and Zito that were prepared by Georgette Brnilovich Osman and her family.  Many faithful gathered around His Grace and Kum Rodney for the turning of the Kolac, sharing in one of the most poignant moments of this parish family’s year.  Immediately after this blessing, His Grace called for volunteers to come forward to serve as Kumovi for the parish’s 105th Slava celebration in 2019.  This call was answered by Bob and Diane Baron, longtime active stewards of the parish.

During the banquet, the parish recognized two of its 2018 high school graduates:  Alexander Taylor, the son of Ivana Stepanov Taylor and Anthony Taylor (and grandson of +Prota Stevan and Protinica Ana); and Kaytlin Chichester, daughter of Bryan and Heidi Chichester and granddaughter of the parish’s executive board president, Julie Madjarevich Taylor, and John Taylor.

Milan Mrkal, immediate past president of the parish executive board and current vice president of the Diocesan Council, served as master of ceremonies for short program of remarks.  During this program, Kum Rodney Torbic offered a loving reflection on his deep personal connection with the parish going back to his youth, and expressed thanks for all of the parish’s good works and service to the parish community.  Words of encouragement and congratulations also were offered by Julie Taylor and Father Branislav.  His Grace reflected upon the events from Washington D.C. where the Serbian Diaspora celebrated the 100th anniversary
of the day the Serbian flag flew at the White House. With paternal blessings and greetings His Grace concluded the program.

Having gathered as a family to pray, to receive spiritual sustenance in the Holy Gifts, and to enjoy an agape meal of love for bodily hunger and thirst, the clergy, faithful, and guests concluded their day with a prayer led by His Grace.  In this way, the parish not only closed its 104th year of its service to the Lord and to its community, but it has begun the 105th year of that service – and it looks ahead to accomplishing much as it moves forward.  Through the prayers of the Holy Prophet Elijah, St. Sava, and all the saints, may the Lord bless us in those endeavors! 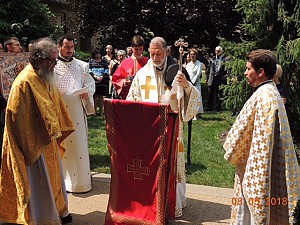