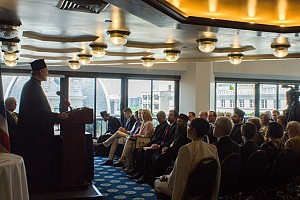 Centennial Academic Symposium: Serbia and America in World War I

On Sunday, July 28, 1918, President Woodrow Wilson issued a proclamation to the American people. It was read in churches throughout the country and published in virtually all major newspapers. The Serbian flag was raised at the White House in honor of “…the fourth anniversary of the day when the gallant people of Serbia, rather than submit to the studied and ignoble exactions of a prearranged foe, were called upon by the war declaration of Austria-Hungry to defend their territory and their homes against an enemy bent on their destruction…”

Integral to the centennial celebrations in Washington, DC was a symposium, which analyzed the following summons of the then President of the United States, in light of history and the present: “It is fitting that the people of the United States, …remembering that the principles for which Serbia has so nobly fought and suffered are those for which the United States is fighting, should on the occasion of this anniversary manifest in an appropriate manner… their war sympathy with this oppressed people who (…) yearn for independence and national unity”.

Under the aegis of the Serbian Orthodox Dioceses in the United States of America and co-sponsored by the Serbian National Defense Council in America, an academic symposium was held on Thursday, July 26, 2018 in the prestigious First Amendment Hall of the National Press Club in Washington, DC.

Dr. Branko Terzic, Master of Ceremonies, formally opened the symposium and introduced the welcoming speakers: His Grace Bishop Irinej of Eastern America, episcopal patron of the centennial celebration; Dr. A. Wess Mitchell, Assistant Secretary of State for European and Eurasian Affairs; Her Excellency Zeljka Cvijanovic, Prime Minister of Republika Srpska in Bosnia-Herzegovina; and Mr. Nebojsa Zivkovic, President of the Serbian National Defense. Also present were, Their Graces, Bishop Maxim of the Serbian Orthodox Diocese of Western America and Bishop Saba of the Georgian Apostolic Orthodox Church in North America.

Her Excellency Dr. Krinka Vidakovic Petrov, Research Scholar and former Ambassador of Serbia to Israel, delivered the keynote address, speaking eloquently, at length and with great detail, on “The Role of Serbian Americans in World War One”. Her presentation was followed by a lively and thought provoking discussion. This delivery, as well as other pertinent writings of many more scholars on World War I, were gathered into an impressive bi-lingual anthology, edited by Dr. Vidakovic-Petrov. Published for the occasion, the anthology was made available to the public, under the title, “The Great War 1914-1918: The Kingdom of Serbia, the United States of America and the Serbian America Diaspora” (Alhambra: Sebastian Press, 2018, 503 pp).

Mrs. Svetlana Rogic, Founder and Executive Director of Art Exchange, a 501(c)(3) nonprofit organization, introduced a bi-lingual, visual-literary exhibit on Serbs in World War I, titled “Тамо далеко: 1918-2018” – “Over There, So Far Away: 1918-2018”, inviting everyone during the ensuing break to visit this impressive, interative poster exhibition. The Diocese of Eastern America is presently making arrangements, during the course of the approaching autumn, for the exhibit to travel to its parishes, to include as many persons as possible in the continued centenary celebration.

Following the break, the symposium resumed with a panel discussion moderated by Dr. Branko Mikasinovich, renowned Anthologist and Broadcaster (retired) for the Voice of America.  Among the Serbian American presenters, were: Dr. Gordon N. Bardos, President of SEERECON, LLC; Professor Dr. Julian Schuster, Provost, Senior Vice President and Chief Operating Officer of Webster University; Rev. Dr. Vasilije Vranic, Professor at the Saint Sava School Theology, and Adjunct Professor at Saint Xavier University; together with Dr. Branko Terzic, Distinguished Fellow, Council on Competitiveness, Nonresident Senior Fellow, Atlantic Council, and Managing Director, Berkeley Research Group LLC, as well as The Royal Adjutant, Member of the Privy Council, and Delegate of His Royal Highness Crown Prince Alexander of Serbia in the United States. Individually and collectively, they examined the involvement of Serbian Americans historically coming come to the assistance of Serbia and its lasting impact on Serbian-American relations today. While fully cognizant of recent difficulties, the need for the restoration of proper, historically correct and ongoing relations were noted, often times including profound personal narratives.

Following a thought providing discussion, His Grace Bishop Irinej summarizing the presentations, responded collectively to the various question posed throughout the enriching lecture and panel discussion. Many calls were heard for the institutionalization of such gatherings in the Nation’s Capital on an ongoing basis. Evoking his past experience as Executive Director of the Office of External Affairs of the Serbian Orthodox Church in the USA (1999-2003), the Bishop announced his intention to reinstitute the annual Serbian American Leadership Conferences in Washington, DC.

In conclusion, on behalf of the Episcopal Council of the Serbian Orthodox Church in North and South America, Bishop Irinej presented Mr. Nenad Djordjevic of Chicago, Illinois, the Award of St. Sebastian of Jackson in the First Degree, for his exemplary work as a member of the World War I Centennial Committee.

The magnitude of the entire commemoration was of such prestige, given that only two foreign flags have ever flow at the White House. The Serbian Flag was the first ever to fly at the White House and the second being the flag of France in 1920. Thus, this event was of equal importance to both Serbians and Americans, and the resuming of our ongoing relations.