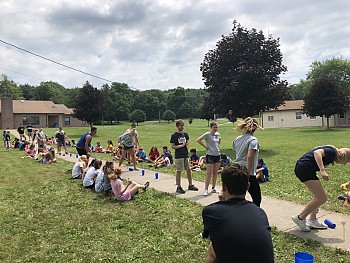 The first week of Saint Sava Camp Shadeland, was led by Father Rodney Torbic, Camp Director Father Milan Pajic, Father Milan Dragovic, and Father Dragan Zaric was a huge success. Young Serbian children ranging from ages 7-17 from all across the United States and Canada joined together to share their love for God and Serbian culture. The week started long before with the Kolo President and Vice President Millie Radovick and Dee Dee Baskot working endlessly to make food orders, order arts and craft supplies for the campers, and ensure that the camp ground was ready for the season. This year the head counselors, Danielle Kochka and Nebojsa Varagic, worked to create new activities for the campers. The highlights of this year included a dunk tank at the Monday night carnival, Color Games in which campers split up in teams and competed daily challenges for points, with an award ceremony for the winner at the end of the week. On Tuesday, the campers, counselors, and parents took two school buses to the local bowling alley to bowl. For many children, this was the first time to experience bowling. The evening included a birthday party for campers that have a birthday during first week.

The eldest group of campers got so involved and interested in religion class that they decided they would like to learn more. On Wednesday night, the four priests led a late night session in which the oldest campers asked various questions concerning the Orthodox faith and the topic of the camp season; Prayer. The priests gave real life examples from numerous saints, touching upon the Jesus Prayer and other forms of Orthodox prayer.

As always, Waldameer on Thursday was a camper favorite, but the campers also enjoyed daily religion, Serbian music, arts & crafts, and kolo classes. The campers concluded this week of learning about prayer by having a pomen at the cemetery across the street for the departed souls that resided on the Shadeland grounds. Friday night the campers gathered in the dining hall for the Shadeland dance. The counselors put together a playlist that had all the campers on their feet with a mix of Serbian, American, Kolo, and Rock n Roll music. Camp volunteers, mothers and fathers, worked hard to keep our children well fed and happy throughout the week. Overall, the campers had a fun filled week, making lasting memories, friendships, and sharing in love for God and each other. Even though only the first week has come to an end, we gladly rejoice as we together exclaim “All Roads Lead to Shadeland!” 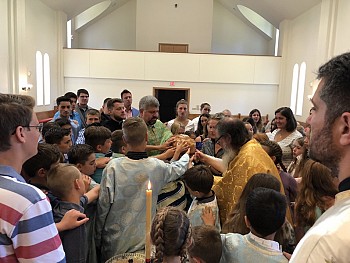