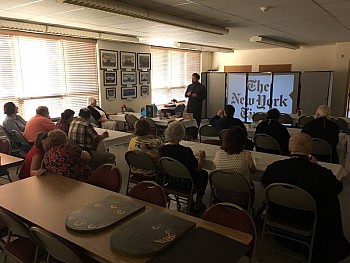 Beginning with the Divine Liturgy on Thursday, June 28 and continuing with lecture on Saturday evening, the parish devoted attention on the importance of St. Lazar and the martyrs of Kosovo.

Faithful parishioners from St. Nicholas Church were in attendance on Vidovdan and sang the inspiring responses. Refreshments followed in the parish hall.

Father Deacon Dr. Anicic presented his lecture on the Serbian Orthodox monasteries in Kosovo and Metohija after the Vesper service. The power point presentation drew attention to the extensive activities scheduled in Washington D.C. marking the end of WWl.

Father Deacon Anicic made the connection between the Serbian Peoples willingness to sacrifice for the Heavenly Kingdom in the Battle of Kosovo and their participation in WWI. He cited the influential roles of scientist Michael Pupin and St. Nikolai Velimirovich.

Father Deacon Anicic noted the significance of the parish priest from Johnstown, Fr. Jovan Krajnovich, giving the  prayer at the Spirit of Liberty dinner on Vidovdan 1918 in connection with the participation of the Serbian People in WWI.

Father Deacon Anicic's lecture included speaking about the Serbian monasteries of Decani, Ravanica, Gracanica, Sopocani and others. He showed a photo of the church where St. Lazar and his followers took Communion.

The lasting lessons of the Serbian Orthodox commitment to the Heavenly Kingdom were made clear in inspiring and captivating presentation by Father Deacon Dr. Anicic.  He said to live worthy of the Gospel in the Church.

Archpriest George Johnson and Matushka Faith Johnson joined the attending faithful and clergy at the lecture. Thank God for Father Milan Dragovic and the faithful of Johnstown for the extensive remembrance of Vidovdan.

Thank Father Deacon Dr. Jovan Anicic for his enriching Christian education efforts. May the lessons of the St. Lazarus and the martyrs of Kosovo be remembered and inspire Christians for generations to come. 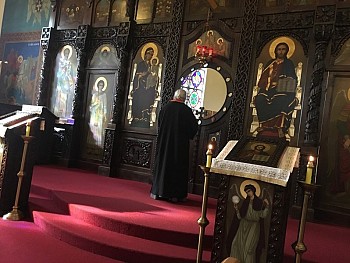