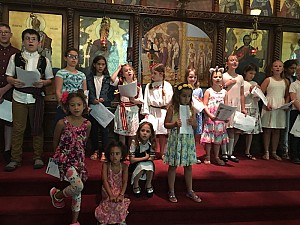 On Sunday June 24th, the St. Nicholas Serbian Orthodox church of Philadelphia held a commemoration in honor of  Vidovdan. The day began with Divine Liturgy, which was followed by Parastos for all Serbian warriors who laid down their lives in defense of the Faith and the Fatherland, from the Battle of Kosovo until today.

Upon completion of the Parastos, the children of the church-school performed a program consisting of songs and recitations about Kosovo. The children sang “Kosovo will Resurrect” (Васкрснуће Косово), “O Srbijo Mother Dearest” (Ој, Србијо Мајко Мила), and “Heavenly Srbija” (Небеска Србија). The program was highlighted by the  children of the Baltic family - Kosta, Sava and Tesa, who gave a biographical presentation of their family ancestry from the Nerodimka region of Kosovo. It was there that their great-grandfather, Rajko Bakic, owned half of the large Goles mines. After the expulsion of their great-grandfather from Kosovo during WWII, the entire family settled in Belgrade.  As well as learning about the history of Kosovo, the children learned about their family ancestry as well. 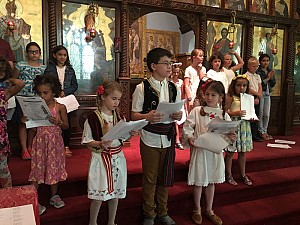