The Day the Serbian Flag Flew at the White House 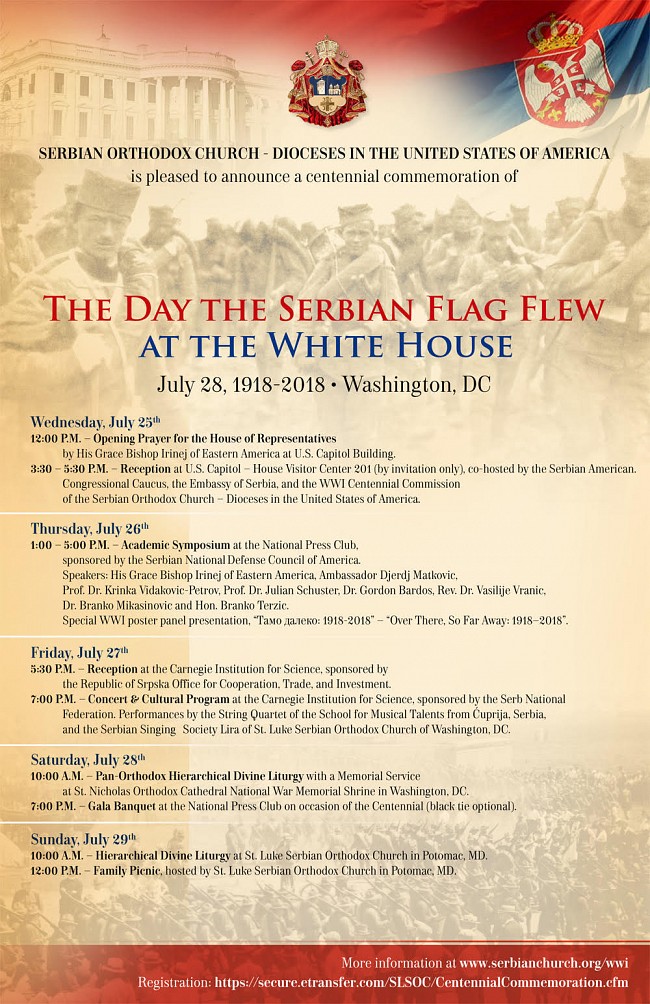 Joint Statement
JOINT STATEMENT OF THE PRESIDENTS OF THE
SERBIAN NATIONAL DEFENSE COUNCIL OF AMERICA AND THE SERB NATIONAL FEDERATION
June 29, 2018 – Pittsburgh/Chicago

The Presidents of the two oldest Serbian organizations in the United States, the Serbian National Defense Council of America and the Serb National Federation, issued today the following joint statement:
Next month we will join Serbian-Americans from across the country in Washington, DC, under the Patronage of His Grace Bishop Irinej and the World War I Centennial Commission of the Serbian Orthodox Church in North and South America, to commemorate the 100th anniversary of President Woodrow Wilson’s declaration of a Day of Prayer for Serbia and the historic flying of the Serbian flag at the White House.

This important milestone, which will be marked by a series of events, is an opportunity to reflect on the historic alliance and friendship between the United States and Serbia that saw us stand in defense of our shared values in both World Wars—from the Salonika Front to Operation Halyard. It will also be an opportunity to recall a time when our community helped shape, through its unique contributions and active involvement, policies and decisions that reflected those values.

In a time when so many of our people continue to face oppression and persecution, when so many still remain driven from their homes, when our churches and monasteries and cultural heritage remain under threat—it is once again important for the voices of Serbian-Americans to be heard in our Nation’s capital.

We encourage you to be a part of this historic commemoration and look forward to seeing you in Washington, DC.

Download the Join Statement of the SNDCA and SNF (PDF)