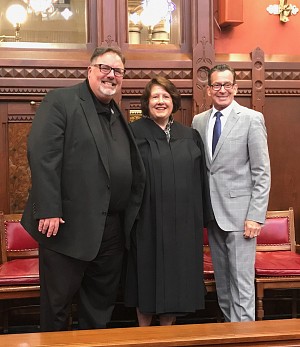 His Grace Bishop Irinej, personally and on behalf of the Diocesan Council and Diocesan Administrative Board of the Diocese of Eastern America, offered heartfelt congratulations to Her Honor, Connecticut Superior Court Judge, Nada K. Sizemore, noting “we are all very proud of Nada and rejoice at her well-deserved promotion! Her input, as counsel to the Diocesan Council and Diocesan Administrative Board, has been invaluable to our Diocese, especially in this beginning phase of our administration and the need to pursue many legal issues critical to the life of our Church!”

May God grant her health, stamina, rightful discernment and length of days on the Bench of the Superior Court of Connecticut!

(HARTFORD, CT – 4/13/2018) – Governor Dannel P. Malloy today announced that he is nominating fourteen state residents to fill vacancies for judgeships on the Connecticut Superior Court. These announcements come in addition to the eleven nominations for the court that the Governor made on Tuesday of last week, and the five he announced last Thursday.

While these nominations represent only a fraction of the 45 vacancies currently in the Superior Court, these 30 nominees will provide critical judicial capacity in performing the essential duties of the court system. The Governor intends to leave a total of 21 positions vacant by the end of his term. Currently, the bipartisan budget assumes a vacancy of only 12 positions, which means that this plan of action would realize additional, unanticipated budgetary savings by leaving nine funded positions vacant.

“Selecting nominees to fill vacancies in our court system is one of the most important duties that a governor performs – they must possess the qualities that build a stronger, fairer Connecticut for everyone in the long-run,” Governor Malloy said. “I believe that each of these women and men will bring to the bench the diverse qualities that mirror the people of our state while also meeting the high principles and integrity that our citizens deserve.”

Governor Malloy’s nominations for the Superior Court include:

Nada K. Sizemore of Cromwell: Sizemore worked in the insurance industry for over 31 years – 24 of which were with the Travelers Insurance Company in varying capacities in its corporate legal services organization. She most recently served as Second Vice President and General Counsel for Northland Insurance and Northfield Insurance – wholly owned subsidiaries of Travelers. In this capacity, she provided full legal support for the 500-person Northland organization within the Travelers Business Insurance Legal and Claim Legal groups. She currently provides legal support to varying religious nonprofit organizations including the Serbian Orthodox Diocese of Eastern America; St. Sava Serbian Orthodox Cathedral of Boston, Massachusetts, Inc.; and the Central Church Council. Prior to her career in insurance, she had served a two-year appointment as a Judicial Law Clerk to Connecticut Superior Court judges. She is a graduate of Western Connecticut State College, where she received her Bachelor of Arts, and Pace University School of Law, where she received her Juris Doctor degree.