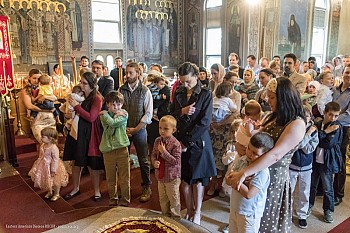 On Sunday, June 3, a joyous feast was held at Holy Dormition Convent "Novo-Diveevo" in Nanuet, NY. The feasts of the Meeting of the Vladimir Icon of the Mother of God and Sts. Constantine and Helen coincided with the Sunday of All Saints. The Vladimir Icon of the Theotokos housed in the convent’s main St. Seraphim Cathedral is especially revered, as it once belonged to the Optina Fathers. The founder of the monastery, Archbishop Andrei (Rymarenko) of Rockland, established the custom of performing a procession with the icon around the territory of the monastery.

Singing responses at Divine Liturgy was the Holy Prince Vladimir Youth Organization choir under the direction of Reader Adrian Fekula.

At the conclusion of Liturgy, the procession began, with Fr. Alexander bringing the wonderworking Vladimir Icon of the Mother of God, blessing the buildings and cemetery of Novo-Diveevo. The procession concluded before the monument of the convent’s Heavenly patron.

The celebration was centered on the blessing of the monument to Venerable Seraphim of Sarov. The monument was sculpted by A. Leonov and donated by the fund "Dialogue of Culture – United World" under the direction of Yuri Sandulov and the Consulate General of the Russian Federation in New York. It was presented with the aim of strengthening the spiritual ties between the Moscow Patriarchate and ROCOR, as well as cultural ties between Russia and the United States.

The monument was installed near the entrance to the convent’s main Cathedral of Saint Seraphim of Sarov, in which an icon of the Vladimir Mother of God—a gift to the convent’s founder, the late Bishop Andrei of Rockland, from Elder Nektarios of Russia’s Optina Pustyn Monastery—as well as two icons of Christ that had belonged to Tsar Nicholas II and a cross from the Ipatiev House in Ekaterinburg, where the members of Russia’s last royal family were martyred, are enshrined.

After its consecration, Bishop John of Naro-Fominsk, Administrator of the Patriarchal Parishes in the USA, who joined the hierarchs for the procession, read aloud a greeting from Metropolitan Hilarion thanking all for their labors in erecting the monument, and reflecting on the spiritual significance of the monument: “Once, still during his lifetime, Saint Seraphim of Sarov addressed the Orthodox and said that when we have a disturbance in our heart, we can go to him even after his death at his grave and speak with him. And now the people can come here, sit in quiet and pray, and ask for help, as to the living.”

Metropolitan Tikhon likewise greeted all those gathered, thanking them for their joint prayers and underscoring the importance of the Novo-Diveevo Convent in the modern world: “Today, as we gather to honor Saint Seraphim in this holy place, we thank God for the miracles of faith and renewal all around us. We are especially thankful for the renewal of monastic life at Diveevo, Russia; for the finding of the relics of Saint Seraphim and their presence now at Diveevo, and for the freedom to be witnesses to the Risen Christ in America.”

The Consul General of the Russian Federation in New York, Sergey K. Ovsyannikov, delivered greetings and remarks from the Russian Ambassador to the United States, Anatoly I. Antonov, emphasizing the importance of spreading cultural and spiritual values of Russia in the New World.

A festal picnic luncheon was held for all on the grounds of the monastery following the consecration.

Later that evening, a gala reception was held in the Consulate General of the Russian Federation in New York culminating the joyous occasion.

Located an hour north of New York City on over 40 acres of land, the convent was founded in October 1949. The convent’s name—“Novo-Diveevo”—recalls the Diveevo Women’s Monastery in Russia that was closely associated with Saint Seraphim during his lifetime. During the Soviet era, the monastery had been closed and desecrated, while its nuns were driven out, exiled, and martyred. It was subsequently returned to the Church and fully restored. Novo-Diveevo was established in an effort to preserve the living memory and tradition of Saint Seraphim and Diveevo. Over the years, the convent has been home to many nuns from various parts of the world. The convent is home to many sacred icons artifacts, among which is a full length portrait of Saint Seraphim painted during his lifetime. 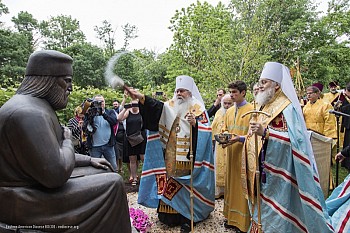