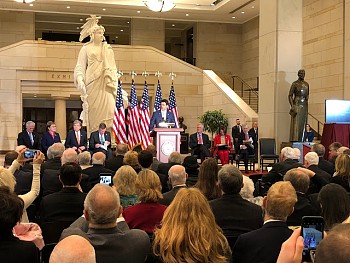 A late winter snowstorm shut down Washington, D.C. on the first day of spring, March 21st, 2018.  The federal government closed, schools were canceled and residents were advised to stay at home.

The snow emergency did not deter the presentation of the Congressional Gold Medal at the Capitol to the OSS (Office of Strategic Services), the intelligence and espionage agency established during World War II.

Reflecting on the hardships that OSS members endured during the war, I decided that bad weather would not stop me from getting there to represent my late father, George Vujnovich, who organized the OSS Halyard Mission, in which over 500 U.S. and Allied airmen were rescued and evacuated from Nazi-occupied Yugoslavia in 1944.

Arriving at Emancipation Hall where the ceremony took place, I was happy to see Stephanie Lalich Jones, daughter of the gallant Captain Nick Lalich, who led the field mission to evacuate the downed airmen who were being sheltered in farmhouses under the protection of Serbian resistance leader General Draza Mihailovich and his forces.  Stephanie was accompanied by her two daughters, Caroline and Rose.  I also had the pleasure of meeting Georgene Musulin, who attended the ceremony to represent her father, Captain George Musulin, OSS liaison officer with Mihailovich's resistance forces.  We were so proud of our fathers and regretted that they did not live to witness this ceremony.

Around twenty OSS veterans - all over 90 years old - did attend, arriving in high spirits from different states despite the snowstorm.  They are only a remnant of the 13,000 men and women who served in the OSS.

After the invocation, the Speaker of the House of Representatives, Paul Ryan, presented the medal to the OSS "on behalf of a very grateful nation."  Representative Bob Latta (R. Ohio) followed with eloquent testimony of the bravery shown by his late friend and constituent Arthur Jibilian, radioman for the Halyard Mission rescue team.  Inspired by Operation Halyard, Congressman Latta became the principal sponsor of legislation to honor OSS veterans with a Congressional Gold Medal.

Latta praised Arthur Jibilian, who passed away eight years before the ceremony, for his role in Operation Halyard, in which he participated in an airlift of more than 500 U.S. and Allied personnel who were forced down behind enemy lines in Serbia during World War II.

In a bipartisan spirit, the Congressional leadership, including Senate Majority Leader Mitch McConnell and House Democratic Leader Nancy Pelosi spoke at the ceremony to honor the wartime contributions and sacrifices of the men and women of the OSS.

A well-attended reception hosted by the OSS Society followed the ceremony.  Representatives of the CIA and Special Forces acknowledged that they stood on the shoulders of the OSS.

"Halyard" is engraved on the Congressional Gold Medal, along with the names of other important OSS operations and will forever be an official part of American history.  The mission of George Vujnovich, my father, and Nick Lalich, Art Jibilian, George Musulin, Richard Felman and other members of Operation Halyard to tell the story of over 500 airmen shot down over Yugoslavia, their rescue by Draza Mihailovich's resistance forces and local Serbian farmers, and their successful evacuation by the OSS has been accomplished. 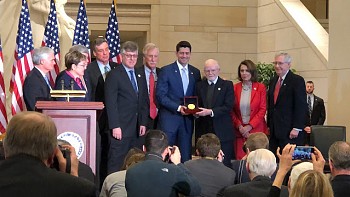