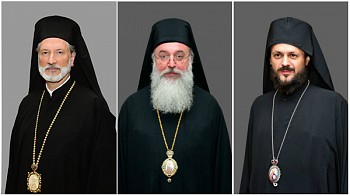 In a letter to the Deputy Secretary of State on March 27th, 2018, the three Serbian Orthodox hierarchs in the United States called upon American officials to condemn the brutal police assault on Marko Djuric, the Director of the Serbian Government Office for Kosovo & Metohija, which also targeted journalists and unarmed citizens.  Over 34 people were seriously injured during the attack on March 26th, with many requiring hospitalization.

Noting that the brutality “seems to be an integral part of an orchestrated campaign against Kosovo’s Serbian population coming in the wake of the assassination of Oliver Ivanovic,” the hierarchs stated that the Kosovo Albanian authorities have once again demonstrated their lack of willingness to assure the most basic human rights and civil liberties for Serbians who were living in their own land.

The bishops also called on the State Department to make clear that “the United States will never condone beatings of peaceful citizens, journalists, and public officials” in Kosovo & Metohija.

The letter to Deputy Secretary of State John Sullivan can be found below, signed by:

Letter to the Deputy Secretary of State

We, the bishops of the Serbian Orthodox Dioceses in the United States, are writing to express our grave concern over yesterday’s assault by the Kosovo Police on Marko Djuric, Director of the Serbian Government Office for Kosovo and Metohija, as well as journalists and unarmed citizens. Our concern is particularly heightened noting that this brutality seems to be an integral part of an orchestrated campaign against Kosovo’s Serbian population, coming in the wake of the assassination of Oliver Ivanovic.

In a provocative show of force, the police force stormed a meeting between citizens and government officials fully-armed and with shock bombs. Over 34 people were seriously injured requiring hospitalization, while Marko Djuric was unlawfully arrested, beaten, and paraded through Pristina before jeering crowds.

Yesterday’s events demonstrate once again that the Kosovo Albanian authorities are unwilling to assure the minimum of basic civic and human rights, including the right to peacefully assemble, to the Serbian population living in its own land. Moreover, these actions show a wanton disregard for the obligations Pristina has itself undertaken to implement essential human and civil rights standards as part of its Stabilization and Association Agreement with the EU, in addition to contravening the letter and spirit of the Brussels dialogue.

We call on you, Mr. Deputy Secretary, to show that the United States remains committed to protecting the most fundamental rights and basic human dignity of the Kosovo Serbian population by condemning yesterday’s police brutality in Kosovska Mitrovica, and by making clear to the authorities in Pristina that the United States will never condone beatings of peaceful citizens, journalists, and public officials.