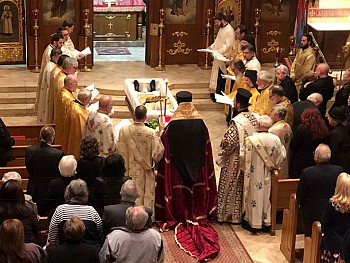 The Serbian Orthodox Church lost a devoted, faithful, and loving servant in this world with the passing of Protojerej-Stavrofor Stevan Stepanov on February 24, 2018 at his home in Medina, Ohio.  From February 1973 until his retirement in August 2014, +Proto Stevan served the Serbian Orthodox Church as pastor of the parish of the Holy Prophet Elijah in Aliquippa, Pennsylvania. He returned to his beloved Sveti Ilija a final time for his funeral and burial on February 27-28, 2018.

The funeral proceedings began with visitation in the St. Elijah Church on the afternoon of February 27.  Per his wishes, +Proto Stevan was arrayed in priestly robes that had once belonged to one of his predecessors at the parish, +Protojerej-Stavrofor Vlastimir Tomich of blessed memory.  Hundreds of faithful and friends came throughout the visitation and services to pay their final respects to +Proto Stevan and to offer prayers and support to his devoted wife, Protinica Ana, his daughter Ivana and husband Tony, his son Marko and wife Inna, and his grandsons Alexander, Dimitri, Roman, and Stevan.  At the family’s request, during the visitation a recording of +Proto Stevan singing liturgical songs with his St. Elijah Serbian Church Choir played over the church’s sound system, offering a testament to the distinct and rich musical talents +Proto Stevan shared so freely with so many during his life.

Shortly before the start of the funeral service on the evening of February 27, the “Tsar Lazar Male Choir” of the greater Pittsburgh area ascended to the church’s choir loft to sing selections in memory of +Proto Stevan, who founded the choir in the early 1990s.  Among their selections, directed by George Milosh, was “Skazi mi Gospodi” (“Tell me, Lord”), by V. Dudnik -- one of the first songs +Proto Stevan taught the choir in its earliest days.

The funeral service for a priest began at 7:00 PM on February 27 with the arrival of His Grace, Bishop Irinej of the Serbian Orthodox Diocese of Eastern America.  Meeting him in the temple were over twenty priests and deacons, hailing from around the Diocese’s Pittsburgh Deanery as well as from Illinois, Indiana, Michigan, Florida, Massachusetts, Ohio, and elsewhere.  Among them were two sons of the St. Elijah parish whom +Proto Stevan had supported in following their own priestly callings, Protojerej-Stavrofor Rade Obsenica (pastor of St. George Serbian Orthodox Church of Monroe, Michigan) and Protojerej-Stavrofor Dr. Rodney Torbic (retired pastor of St. George Serbian Orthodox Church of Carmichaels (Masontown), Pennsylvania).  Responses to the funeral service were sung by the St. Elijah Serbian Church Choir (with the support of visiting singers from other parishes), directed by Kathy Loverich.

At the end of the funeral service, a loving and moving eulogy was delivered to the full church by Protojerej-Stavrofor Dr. Milos Vesin of St. Archangel Michael Serbian Orthodox Church in Lansing, Illinois.  Proto Milos recalled +Proto Stevan as a deacon and as his teacher of religion during Proto Milos’s youth in Novi Sad in the 1960s. He shared a story of how +Proto Stevan brought his entire religion class to have its lesson at the hospital where the young Milos was recovering from an illness, so as not to deprive Milos of his chance to learn the faith.  It was in that moment, Proto Milos said, that he decided that he wanted to devote his life to serving God, just as +Proto Stevan did. Proto Milos concluded by thanking +Proto Stevan’s family for supporting +Proto Stevan’s service to God and the faithful, reminding all present of the great sacrifices that clergy families make as part of that service, as well as the rich rewards that God offers to those who make those sacrifices.  Proto Milos added that +Proto Stevan’s death was being commemorated not only in Aliquippa, but also in Novi Sad, where +Proto was still remembered as an eminent and devoted servant of the church -- nearly 50 years after he left there for America.

The funeral proceedings continued on the morning of February 28, with the service of the Liturgy of Pre-Sanctified Gifts celebrated by His Grace, Bishop Irinej and visiting clergy.  Once again, dozens of priests and two deacons participated in the service, while the faithful filled the church for a second day. Responses were again sung by the St. Elijah Serbian Church Choir, with cantoring by Milan Damljanovic of Cleveland, Ohio and several of the visiting clergy, including Protojerej-Stavrofor Aleksandar Vlajkovic of St. Sava Serbian Orthodox Cathedral of Boston, Massachusetts, Protojerej-Stavrofor Rajko Kosic of Holy Trinity Serbian Orthodox Cathedral of Pittsburgh, Pennsylvania, Protojerej-Stavrofor Dragan Zaric of St. George Serbian Orthodox Church of Clearwater, Florida, and Protojerej George Veselinovic of St. Nicholas Serbian Orthodox Church of Monroeville, Pennsylvania.  Additionally, readings of the psalms during the service were offered by several men of the St. Elijah parish who had served +Proto Stevan as altar boys and had been ordained as Readers with his support, guidance, and encouragement.

During the liturgy, His Grace, Bishop Irinej offered an eloquent and warm eulogy of +Proto Stevan, which emphasized the loving and gentle nature that pervaded +Proto’s service to his flock.  His Grace described +Proto’s life and spirit as “blagoljepije,” a blessed beauty or gentle beauty,  that can only be understood as a gift from God.  He went on to offer sympathy, love, and support to +Proto’s family and his grieving church family.  His words as archpastor and father of the diocese provided great comfort to those assembled.

A pomen began immediately after the end of the liturgy, during which His Grace and each priest present commended the soul of +Proto Stevan into the Mansions of the Righteous.  Following the pomen, Father Branislav Golic, the current pastor of the St. Elijah parish, offered yet another eulogy of +Proto Stevan, which recounted +Proto’s life and his service to the St. Elijah parish and the Serbian Orthodox Church at large.  Emphasizing +Proto’s great faith in God and his love for the faithful, Father Branislav concluded by invoking the Holy Apostle Paul’s words, that +Proto had “fought the good fight, run the race and preserved the faith,” and now was at rest in his Lord.  The services at the St. Elijah Church then concluded with the procession of +Proto Stevan’s casket around the temple, carried by his brother priests, immediately prior to the departure to the St. Elijah Cemetery. +Proto Stevan’s final earthly time before the St. Elijah Church was spent as His Grace led all the faithful proclaiming the victory of Life over death with the singing of the Paschal Troparion, Hristos Voskrese iz Mertvih -- “Christ is risen from the dead!”

A funeral procession took the faithful the short distance to the St. Elijah Cemetery, where the burial service concluded.  Fittingly, these services began in the parish’s Resurrection Chapel, which was built with +Proto Stevan’s inspiration and direction in the late 1980s.  The chapel resonated with the singing of His Grace, the clergy, the St. Elijah Choir, and all the faithful during the brief memorial service, just as it had with +Proto Stevan’s own voice so many times in the past.  Finally, +Proto Stevan’s body was translated to his grave site, and was committed to burial as all gathered sang So Svjatimi Upokoj (“With the saints, give rest, O Lord”) and Vjecnaja Pamjat (“Memory Eternal”).

Following the burial, all clergy and faithful were invited to the St. Elijah Center for the daca.  After the meal, remembrances of +Proto Stevan were offered on behalf of several parish organizations, including the altar boys, the Mother’s Club, the Cornerstone Men’s Club, the Kolo Srpskih Sestara “Sveta Petka,” the St. Elijah Choir, and the parish’s executive board.  Proto Milos Vesin also delivered messages from two of +Proto Stevan’s oldest and dearest friends, Dr. Dimitrije Stefanovic of the Serbian Academy of Sciences and Arts, and Protojerej-Stavrofor Marko Todorovic, Episcopal Deputy of the Serbian Orthodox Diocese of New Gracanica-Midwestern America and retired parish priest of St. Nikola Serbian Orthodox Church of Cudahy, Wisconsin.  Finally, Protinica Ana Stepanov addressed all present with memories of her husband, sharing some humorous, poigniant, and loving insights about +Proto and his service to the church, as well as about his final earthly days.

Truly, +Proto Stevan’s service to the St. Elijah parish, and to the Serbian Orthodox Church at large, will be ever-memorable.  Appropriately, his funeral services were served with great dignity and reverance, just as he always served the Divine Services himself.  May +Proto Stevan be given rest in Abraham’s Bosom, and may his memory be eternal! 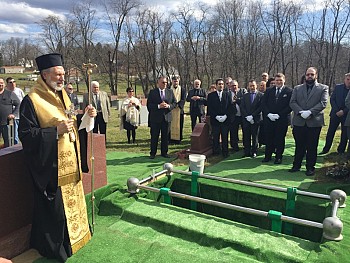