Sunday of Orthodoxy 2018 in Philadelphia 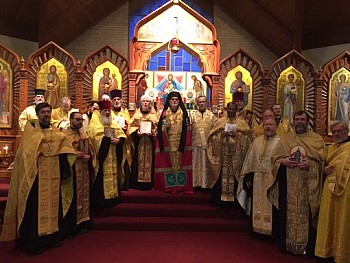 On Sunday February 25th, the faithful of St. Nicholas Serbian Orthodox Church in Elkins Park (Philadelphia) PA., celebrated the Sunday of the Triumph of Orthodoxy beginning with Divine Liturgy, at which many of the faithful received Holy Communion. Following Divine Liturgy, all the faithful present were lead by Fr. Milorad, and the church school children, in procession with everyone carrying icons in celebration of the end of iconoclasim and the restoration of icons in the Holy Orthodox Church.

Due to the inclement weather the procession was held inside the church; but this did not damper the spirit of the faithful, who joyously recited the Synodikon of Orthodoxy and The Creed.

That evening, a group of faithful accompanied Fr. Milorad to the Pan-Orthodox Sunday of Orthodoxy Vespers celebrated by the Orthodox Clergy Brotherhood of Greater Philadelphia, and hosted St. Stephen’s Orthodox Cathedral (OCA) in Philadelphia. His Eminence, Archbishop Mark of Philadelphia and Eastern Pennsylvania, was the lead celebrant and homilist. In his homily, His Eminence called upon all present to manifest the unity of Orthodoxy not just on one day, but every day of the year.

North of Philadelphia, in the Lehigh Valley, the Sunday of the Triumph of Orthodoxy was celebrated at St. Nicholas Russian Orthodox Church (OCA) in Bethlehem, PA. , where the lead celebrant was His Grace, Bishop Neophytos Kongai of the Diocese of Nyeri and Mt. Kenya in Kenya, under the Patriarchate of Alexandria and All-Africa. His Grace is the first native Kenyan to be consecrated as a Bishop in his native land. (a link to His Grace’s homily is provided). The next day, His Grace was the special guest speaker at the regular monthly meeting of the Lehigh Valley Orthodox Clergy Brotherhood at St. Nicholas church. His Grace familiarized the brethren clergy with the many struggles of His Grace, and His flock, to witness to Orthodoxy in Africa. The Brotherhood responded by collecting vestments and other liturgical articles, as well as financial aid, to assist His Grace in His labors. 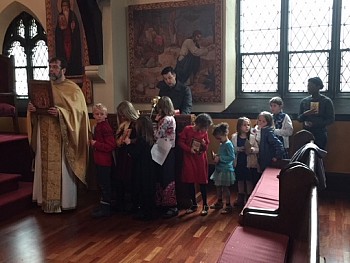