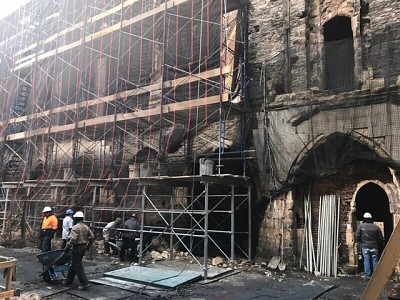 By the beginning of the Old Calendar New Year 2018, the erection of the interior scaffolding, required for the removal of the severely damaged Caen Stone, was fully put into place.  Caen is the limestone, which comprised the interior finishing layer of stone of New York’s St. Sava Cathedral. Unfortunately, given its soft composition and the intensity of the fire on Pascha 2016, it could not be salvaged. The Caen  stone removal is now completed on the East elevation of the interior nave wall, as well as the removal of a damaged archway near the sanctuary.

Again, according to an article, “Our neighbor, the Cathedral of St. Sava”, the Cathedral’s architect, Richard Upjohn, “...chose pure, honest materials that showcased the artisans’ craft—hand-carved trusses and hand-dressed Caen (pronounced “kahn”) limestone, which covered the entire interior and was the cause of cost overruns. It was worth it; the interior has been widely considered to be Upjohn’s masterpiece”(http://easterndiocese.org/news_171010_1.html). It is truly difficult to observe the removal of an irreplaceable piece of New York architectural history, especially one that is so imbued with pray and sanctity.

This necessitated removal, which is being carried out by G.P.J. O'Donoghue Contracting Corporation, is a very complex physical and even emotional process. The Caen Stone is rather easily removed, albeit, a painstaking and careful endeavor entirely executed by hand, with only the occasional light use of a crowbar, as there was no mortar used in the erection of the interior church walls. Given that the church was built by European builders, strictly relying upon tried and true Old World techniques, every step of the restoration process reveals something of the genius that went into the building of this masterpiece of an edifice. The Cathedral walls are three stone layers deep: hand chiseled Brownstone on the outside, roughly hewn black Granite in between, and the interior, as noted, finished in hand dressed Caen. As Granite, by its natural composition, is fireproof, the central layer of hard stone essentially secured and secures the Cathedral walls.

Another fascinating discovery is the correlation between the walls which are standing sturdily and the use of ‘reverse’ Gothic arches in the crypt. As the lower level of the nave walls were replete with niches that consisted of a blind arcade of Gothic arches, each upward arch, with its characteristic Gothic point, found its counterbalance in a reverse counter point in the crypt. Ever upstanding arch continued into the crypt of the Cathedral with a reverse arch that entered into the ground and literally transferred the weight of the walls into the ground. In the opinion of some architects, this may be one of the few, if not the only standing example of such medieval architectural techniques executed in the United States.

Presently, scaffolding is also being erected around the outside of the entire church to enable forthcoming work on the roof, repairing damaged Brownstone architectural details and securing the enclosure of the windows and doors. With God’s help, we move forward with the restoration of hope, the preservation of history and securing the future of St. Sava Cathedral and its community in New York City!

In the wake of the fire, and in anticipation of the Feast of St. Sava, let us all pray fervently and sing from all our hearts: ‘Saint Sava, help us. Hear the voice of our generation, your Serbian people’! 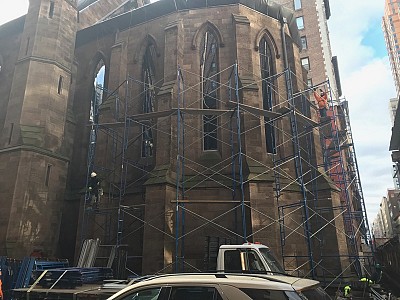 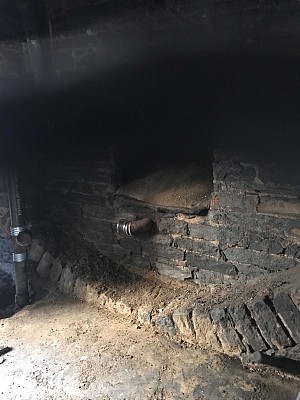