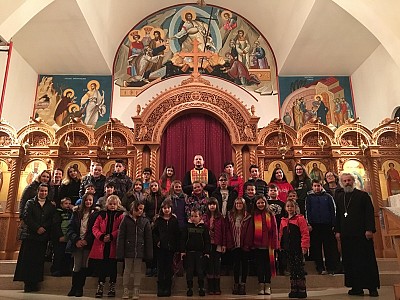 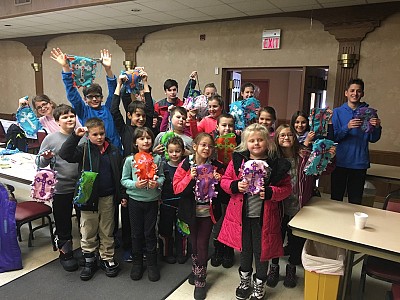 With the blessing of His Grace Irinej, Bishop of the Eastern American Diocese of the Serbian Orthodox Church, the Department of Christian Education organized a three-day children’s winter camp at the St. Mark Monastery in Lorain, Ohio from December 24-27, 2017.

Divided into two large dormitories, campers excitedly unpacked their personal belongings, forgetting that only a few minutes ago they were in a parent's embrace. As it usually happens, childrens’ energy was the key driver of all our events. Our morning alarm clock was Father Dragan Goronjic, the parish priest of the church of St. Dimitrius in Akron and the dean of the Cleveland deanery. With groggy heads but quick feet, the campers were preparing for matins in the monastery church. All those days and nights, they carried the role of active cantors. Father Dragan served daily services. Campers corally responded to the litanies. They loudly pronounced psalms.

Lectures were given according to the age of the campers. Ms. Dragana Crnjak, professor at Youngstown State University in Ohio, stimulated young children's creativity by creating beautiful backpacks and making crosses with multi-colored pebbles. We saw some beautiful drawings of the Mother of God, holding in her arms the Newborn Christ Child. Everything was done in the spirit of Christ’s Nativity.

The lecture of Father Aleksa Pavichevich, the parish priest of St. George's Church from the North Canton, Ohio, was simply titled "Help." Father Aleksa discussed three different Gospel stories in which those in need sought the mercy and help of the Lord Himself, pointing out that we shouldn’t be shy to ask for help of the Lord. Christ never turns His face from us.

Deacon Jovan Anicic talked with children about prayer. He emphasized that man is a being who actually has the need to pray. We concluded that prayer is personal and communal. Sometime it is enough to simply say, "Lord, have mercy," in order that a person might feel the lively presence of God.

In the evening, we watched biblical cartoons, played educational games, read books, went to the cinema, and above all got to know each other.

On Tuesday, December 26, Andjelka Milojevic, Andjelka Majerle, Jasmina Petrovic, Danica Novakovic, along with the older children from the winter camp and from the Cleveland parish, served food for the poor in the St. Herman House-FOCUS Cleveland, an Orthodox Christian house of hospitality. To visit those who are forgotten from the world and serve them is the greatest joy, and we are reminded that above all we need to be good people. Father Dragan then gave the children a lecture on how to be grateful to the Lord for everything.

The winter camp concluded on Wednesday with the Divine Liturgy. Father Dragan did Proskomedia, preparation of the Holy Gifts, standing in the middle of the church surrounded by campers. At the same time, we gave the theological explanation of the preparatory part of the Holy Liturgy. Every prayer was spoken slowly and clearly. Children and parents watched very carefully how the bloodless sacrifice was prepared. During the service, the campers received Holy Communion. Their parents also approached the Chalice.

During breakfast we thanked the children for their attention and we thanked God that we have wonderful children. We looked forward to seeing each other next year!

I use this opportunity to express my sincerest gratitude to His Grace Irinej, Bishop of the Eastern American Diocese of the Serbian Orthodox Church for His blessings and support. I am also thankful to Father Leontije, the Abbot of the St. Mark Monastery for his patience. Speaking also in the names of my clergy colleagues, we thank all the parents for their trust and the campers because they wanted to learn something new about their Orthodox faith. We also express gratitude to all the volunteers who selflessly gave their time and energy to making sure that the camp ran properly and concluded well. We are especially grateful to the moms who diligently prepared delicious meals for all the campers.

We thank the Lord for all the good things with which He feeds and nourishes us.

Until next year, God willing! 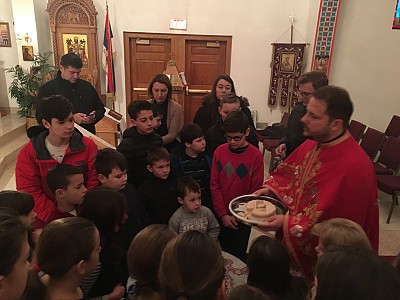