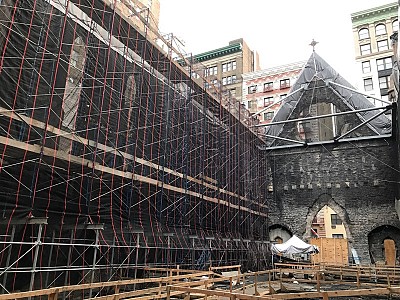 According to Architect S. Don Zivkovic of Zivkovic & Connolly Architects P.C., Project Executive for the rebuilding effort of the grand and historic landmark church, St. Sava Cathedral in New York City, on Friday, December 22, 2017, the erection of the scaffolding, required for the removal of the severely damaged Caen Stone, is presently under way. It is expected to be fully in place by our Orthodox Christmas in 2018, after which the Caen-stone removal will commence. Caen is the limestone, which comprised the interior finishing layer of stone of the resplendent Neo-Gothic St. Sava Cathedral.

According to BKSK Architects in their article, “Our neighbor, the Cathedral of St. Sava”, the Cathedral’s architect, Richard Upjohn, “...chose pure, honest materials that showcased the artisans’ craft—hand-carved trusses and hand-dressed Caen (pronounced “kahn”) limestone, which covered the entire interior and was the cause of cost overruns. It was worth it; the interior has been widely considered to be Upjohn’s masterpiece” (http://easterndiocese.org/news_171010_1.html). Therefore, special care will be taken to attempt to preserve a section of the interior limestone wall where the original altar frescoes, executed in sienna and gold tracery, have been been fused into Caen Stone by the shear intensity of the fire.

Phase I of the Rebuilding effort, consisted of a painstaking four and a half week hand clean up of the debris, which remained after the tragic fire on Easter, May 1, 2016 devastated the Cathedral. G.P.J. O'Donoghue Contracting Corporation successfully executed this initial phase of the rebuilding effort, in near archeological fashion, with constant monitoring of the Cathedral walls for stability. The diligence of their work can be tangibly demonstrated in the fact that every piece removed under the floor of the altar apse was not only removed by hand, but individually hand cleaned. With gratitude to God, among other other items discovered, in various degrees of having been affected by the raging inferno, a silver icon of the Theotokos was recovered – untouched by the devastation!

Through your continued prayers, interest and donations, the restoration of hope, history and future of the St. Sava Cathedral and its community in New York City will, indeed, become a reality! 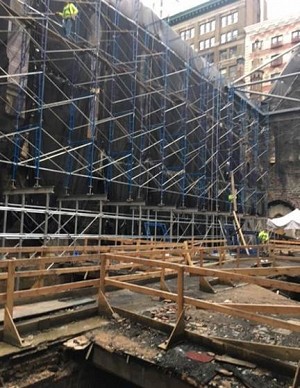 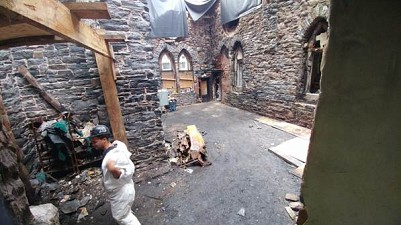