Bishop Irinej lectures at “For the Life of the World" 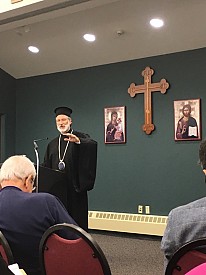 From September 21–24, 2017, Orthodox Vision Foundation (OVF) sponsored an Advanced Leadership Initiative Conference entitled, “For the Life of the World” at St. Vladimir’s Orthodox Theological Seminary in Yonkers, NY. It has been called by many of the pre-selected 65 attendees “historic” and “groundbreaking.” They were welcomed to the program by Co-Trustee of OVF Charles Ajalat, and Archpriest Chad Hatfield, president of St. Vladimir’s Seminary. The goals of the Conference were: to build advanced leadership skills and deeper faith and bonding among the attendees, to improve Orthodox ministries, to mentor younger Orthodox, and to help those who, one day in their life, might want to transition from the profit to the non-profit world. In a two-hour reflection session, the attendees unanimously expressed that they were excited, joyous, and inspired by what they experienced at the Conference.

Speakers at the Conference included committed Orthodox CEOs and current and former executives and professionals, including: the President of Chick-fil-A, Inc.; the CEO of Kinder Morgan (one of North America’s largest energy infrastructure companies); one of the top 10 business bloggers in the U.S. and former CEO of Thomas Nelson (the world’s largest Bible publisher); a former VP of Planning for Exxon Mobil Asia-Pacific; and great theologians, major philanthropists, and heads of Orthodox schools and colleges, including a former dean of the University of Minnesota Medical School, who had been part of a $1.2 billion capital campaign and who taught fundraising at the Conference. Corporate communications was taught by the recently retired head person in that area for Koch Industries. The CEOs of three major Orthodox charities presented their future goals, obstacles to achieving them, and planned solutions, for critique by attendees. There was also a talk on the role of the laity in the Church by a lay person experienced in that area, a talk on transitioning from the profit to the non-profit world by an expert in that area, and a talk by a bishop of the Church, who had headed an ecclesial external affairs office in Washington, D.C. Two bishops, an archbishop and a metropolitan, offered prayers and remarks.

In his remarks titled, “Orthodox Church in the Public Square”, Bishop Irinej of the Serbian Orthodox Diocese of Eastern America spoke of his experience as Executive Director of the Office of External Affairs of the Serbian Orthodox Church in the USA in Washington, DC from 1999 to 2003. The office was opened at a time when diplomatic relations had broken down between Serbia and the United States of America with the onslaught of the NATO bombing and unilateral declaration of Kosovo Independence. As is traditional to Orthodox Nations, when political solutions fail, the Church takes over representing the Nation, such as the case of Cyprus. However, the Church must be equally wise, pointed out His Grace, to know when to step down and allow politics to resume their course. Of the many lessons learned from his Washington tenure, His Grace expounded on the twin principles of public advocacy: the first being the issue of presence as opposed to absence; and the second, the ability to be proactive instead of reactive. As such a constant and consistent form of proactive representation becomes part of the solution; otherwise absence and reaction lend themselves to being part of the problem. The Bishop concluded by urging the opening of a pan-Orthodox representational office of the Assembly of Canonical Orthodox Bishops of the USA  in the Nation’s Capital.

Participants in the conference, who represented 27 cities, were as equally exciting as the speakers. Statistically, 90% were laity; one-third were female; 20% were 40 years old and under; and approximately 30% were from each of the three largest Orthodox jurisdictions, as well as ones from other jurisdictions. Among the outstanding participants were many philanthropists and executive directors of philanthropic organizations; a 29-year-old founder and CEO of an early detection cancer start-up (which has procured $65 million of equity investment and was one of Forbes's "30 under 30 in Healthcare"); key educators and church leaders; the "Bible Answer Man"; an executive of a major golf club manufacturer; CEOs of equity capital firms; book publishers; a manufacturing firm, real estate firm, and construction firm; media, marketing, and internet specialists; prominent lawyers from major firms; and prominent doctors, engineers, and consultants.

Attendees also viewed the screening of the Orthodox full-length professional film Becoming Truly Human and heard a brief introduction of the film—which is directed toward millennials and “nones"—from its director/star. (The film was released by the Antiochian Archdiocese and was made available September 6 to Amazon’s 66 million subscribers. It is also on iTunes, GooglePlay, Xbox, and Vudu. A second distribution company, who distributed Scorsese’s recent film, Silence, is also distributing Becoming Truly Human in many of its 1,000 venues.)