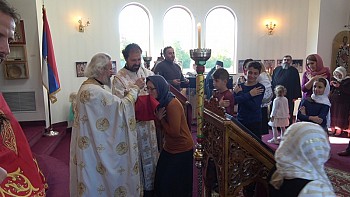 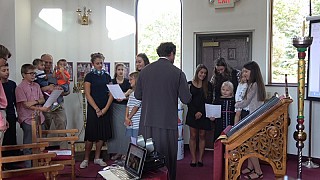 With the Blessing of the Bishop of Eastern America, His Grace Irinej, the Department for Christian Education organized the First Orthodox Christian Family Festival on September 16th, 2017 in New Marcha Мonastery.

On a peaceful and sunny Saturday morning fifty children gathered in the monastery church. Together with their parents, grandmothers and grandfathers, they came to gather together and learn something more about the basics of Orthodoxy.

The famous Orthodox theologian, Fr. Georges Florovsky of blessed memory, wrote that assemblies offer the best means of witnessing to the collective conscious of the Church. It is accurate to add that every church gathering is, in fact, a collective reinforcement in the joyous tidings of Christ’s Resurrection and the approaching heavenly Kingdom.

The Divine Liturgy was celebrated by Archmandrite Leontije of St. Mark’s Monastery, Fr. Dragan Goronjic, parish priest in Youngstown OH and Episcopal Dean of the Cleveland Deanery, and Deacon Jovan Anicic, Director of Christian Education for the Diocese of Eastern America.

Singing the responses for Divine Liturgy from the kliros were Sister Anastasija of New Marcha Monastery, and Professor Nikola and Susan Resanovich. Fr. Aleksa Pavichevich, parish priest of St. George church in North Canton, was the photographer.

To our great joy, many of the children received Holy Communion.

Following Divine Liturgy, our socializing continued through participation in multiple education programs. We divided into tutorials, allowing ourselves to be enthralled by the joy and curiosity of the children.

Whoever so desired, they were able to hear not only magnificent liturgical chanting, but also the beauty of traditional Serbian songs. The voices of the children reverberated in the monastery’s church. The expansive property of the monastery was dominated by competition in soccer. The girls convincingly dominated the boys in a tug-of-war, and they boisterously celebrated their victory.

Andjelka Milojevic patiently assisted the pre-schoolers as the colored a collage with the image of the Prophet Moses, assembling the pieces into a single entirety.

The children were able, through the large illustrated Orthodox primers made available to them, to learn the fundamentals of the Orthodox Faith.

Through the motion pictures of the poignant short meterage Greek film, “What is that?” we were persuaded that the human body passes through various phases of suffering. This film points out that all physically healthy individuals occasionally lack empathy for those suffering from grave illnesses. The conclusion of the film evoked that patience is the basis of Christian life and that Christ’s love is the actuator of all that is good. We recalled our Serbian Patriarch Pavle of blessed memory, and his words that the ill and people with special needs are particularly blessed in that they acknowledge their deficiencies!

We never imaged that the arrival of the local firefighting company would arouse such great joy in the children. This wonderful idea was proposed by Nikola Zamiska, chief of the Brecksville Fire Department. The warmth of the firefighters, in their characteristic red helmets, revealed why they are so loved and respected by the children.

The efforts invested by parents and grandparents were measureless. Without their assistance we would have never realized such a wonderful event. They happily participated in the “workshops”; some reading stories about the lives of the saints, others assembling educative theme cubes consisting of the great Church Feast days, while a third group participated in a play about virtues and vices.

As our fellowship drew to a close, the unanimous opinion ruled that such festivals have to be organized more often.

We believe that our Orthodox Christian Family Festival will only grow stronger and that, through such gatherings, we will show our children only deeds of love, as St. Paisius of the Holy Mountain said. Only in this manner will we all grow into the height, depth and width of Christ.

At this time the Department of Christian Education wishes to thank His Grace, Bishop Irinej, for his wholehearted support, the New Marcha Monastery for its selfless hospitality, all volunteers and parents for their assistance, and the children for their smiles and faith! 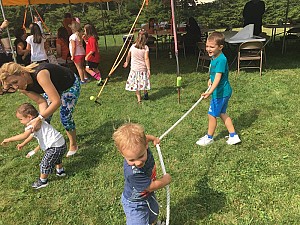