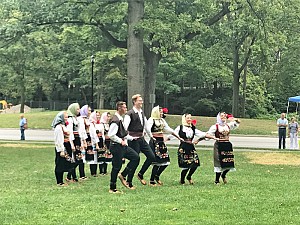 Over 25,000 people attended the 72nd Annual One World Day in the Cleveland Cultural Gardens at Rockefeller Park on Sunday, August 27th, 2017. The weather was beautiful and the now expanded Serbian Cultural Garden (http://serbianculturalgarden.org/), with the recent addition of the Milutin Milankovic bust, but also featuring numerous other sculptures and adorned with our famous Serbian Spruce looked superb and was a popular destination. Hundreds of interested visitors came through the Serbian Garden, which showcased traditional Serbian song and dance, skillfully executed by the Morava Serbian Folklore Group, choreographed by Angela Majerle, from St. Sava Church in Broadview Hts. The Cleveland Cultural Gardens, in close proximity to Cleveland’s bastion of international culture, education and medicine, and home to Case Western Reserve University, University Hospital, Cleveland Clinic, Cleveland Museum of Art, Cleveland Institute of Art, Severance Hall and Cleveland Institute of Music, to name but a few prominent institutions, feature individual gardens representing all ethnic groups that are part of the magnificent mosaic of this Metropolis. The Serbians have had a presence in the Cultural Gardens with a bust of Njegosh since 1937. Through the efforts of Alex Machaskee, then President and Publisher of the Cleveland Plain Dealer, in 2008 the Serbian Cultural Garden proper was dedicated, establishing a proud and permanent presence for the Serbian Community, among other nations, in Cleveland, Ohio. 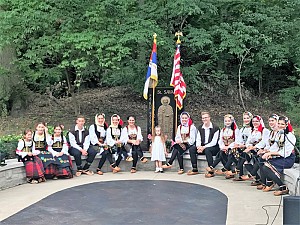