The Royal Couple on Humanitarian Visit 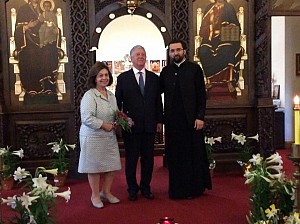 Their Royal Highnesses Crown Prince Alexander and Crown Princess Katherine are visiting Pittsburgh and Johnstown, Pennsylvania, United States, in order to recognize the contributions of Serbian community leaders and organizations, as well as leading United States nonprofit organizations, such as Lifeline Humanitarian Organization, who are committed to organizing and supporting relief efforts that reduce and relieve the suffering of the most disadvantaged and underserved populations in Serbia.

During their visit, on Thursday, 20 April, Their Royal Highnesses attended a reception in Johnstown, hosted by The Circle of Serbian Sisters Organization at St. Nicholas Serbian Orthodox Church, in conjunction with the Joyce Murtha Breast Cancer Center at Chan Soon-Shiong Medical Center at Windber, as well as Pittsburgh, hosted by Lifeline Humanitarian Pittsburgh/Tri-State Committee. Mr. Frank J. Janakovic, the Mayor of the city of Johnstown, proclaimed April 20th to be Serbian Day in their community and welcomed Their Royal Highnesses to Johnstown. His Grace Bishop Irinej of Eastern  America was also present and spoke of the numerous accomplishments of the Royal Couple in general and Lifeline in particular. During their visit to Pittsburgh on the following day, TRH Crown Prince Alexander and Crown Princess Katherine were hosted by the Serb National Federation, as well as at American-Serbian Club.

During this visit to the United States, the Royal couple will also attend many other receptions and fundraising events to raise awareness and gain support for the ongoing medical and humanitarian needs of the Serbian people. 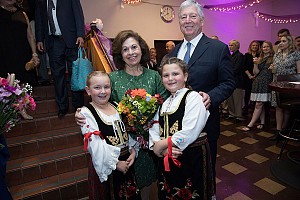