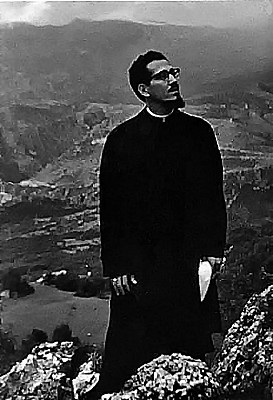 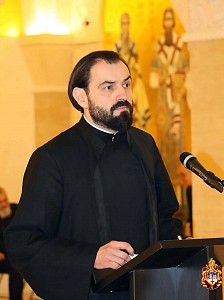 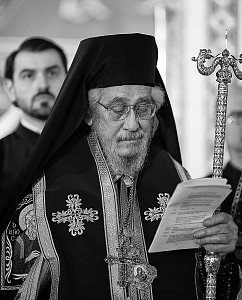 In the overfilled crypt of the Temple of St. Sava on Vracar on Sunday, February 19, 2017 the collection of Sunday and Festal Homilies entitled "The Unchanged Serbian Soul“ of Metropolitan Christopher of blessed repose and authored by Protodeacon Dr. Damjan Bozic, was formally presented.

This work was published by the Foundation of the Archdiocese of Belgrade-Karlovci. The gathering in the magnificent crypt of the St. Sava Temple began prayerfully – with a memorial service led by His Holiness Serbian Patriarch Irinej, with the concelebration, prayerful participation and chanting of His Grace Bishop Arsenije, vicar Bishop of Toplica, a number of clergy and deacons and the mixed choir „St. Vasilije of Ostrog“ under the direction of Katarina Bozic.

The filigree weaving of the life of Metropolitan Christopher of blessed repose, was brought to light by the words of well known Serbian figures from scientific and theological backgrounds, while the evening's formal event was emceed by actress Biljana Djurovic, who also took part in conceiving this event. With much love and respect, she called upon the eminent speakers to share their memories, impressions and knowledge and views on the life and work of the first Bishop born in America. Dr. Dimitrije Stefanovic witnessed to how courageous and decisive Metropolitan Christopher was.

Protodeacon Dr. Sava Milin, professor of Homiletics at the Theological Faculty in Belgrade, gave a review of the homilies of Metropolitan Christopher. Protodeacon Dr. Radomir Rakic, editor of the Informative Service of the Serbian Orthodox Church, attempted to present the homilist's Biblical-exegetical message. V. Rev. Stavrophor Dr. Milos Vesin, parish priest from South Chicago and Lansing and Professor at the Serbian Orthodox School of Theology in Libertyville, was given the last word in the book „The Unchanged Serbian Soul“. The respected Prota, a spiritual child of the late metropolitan, a theologian, psychologist, rhetorician, professor of church chant and choir director, delivered an inspiring and distinct homily entitled „A word from far away, and so close“, introducing all those in attendance on the three life sermons which are not found in this collection. Prota Vesin also read a beutiful and touching letters of gratitute from the metropolitan's family and descendents.

V. Rev. Stavrophor Professor Dr. Vladimir Vukasinovic, the editor-in-chief of the Publishing Foundation of the Archdiocese of the Belgrade-Karlovci and professor of liturgics at the Orthodox Theological Faculty in Belgrade, pointed out some of the most important themes and most significant theological, pastoral and spiritual characteristics of the homiletics of Metropolitan Christopher. Prota Dr. Vukasinovic presented to all gathered three of the important qualities of the metropolitan's sermons: authentically ecclesiastical, deeply rooted in the Church's theology and personal experience. The author and editor of the book, „Unchanged Serbian Soul“, Protodeacon Dr. Damjan Bozic from the Cathedral Church in Belgrade, keeps and nurtures with care the memory of his spiritual father, under whose vigilant eye he grew spiritually and intellectually. Thanking the Serbian Patriarch, His Holiness Irinej, all the speakers but also Dr. Mileta Radojcevic, director of the Committee for cooperation between churches and religious communities at the Ministry of Justice of the Serbian Republic, Protodeacon Dr. Bozic, as someone who worked very closely with him, underlined the love, selfless giving to others of the Metropolitan's cirlce and gave a moving witness.

His Holiness Serbian Patriarch Irinej „first among equals whose word is always at the end“, gave an introductory word of this book of homilies. Offering the final word that evening at the Monument-temple of St. Sava on Vracar, His Holiness Patriarch Irinej delivered an inspiring talk about Metropolitan Christopher, a great hierarch of our local Church. „He began his life in the Church and he finished his whole life in the Church knowing who and what he is, which he proved by nurturing and never forgetting his Serbian, mother tongue“, His Holiness emphasized. „It is good that these very beautiful sermons, full of content and very useful, are published since they will not only be used by clergy of our Church in America but here as well,“ said the first hierarch of the Serbian Orthodox Church in his address.

We should also mention the artists who, through their music and words, made this evening complete. Actor Milenko Pavlov interpretted the metropolitan's sermon „Before Communion“ which he delivered in 2003 and then a section from this homily „Unchanged Serbian Soul“ delivered in Philadelphia on the 600th anniversary of the Battle of Kosovo.

In a very exalted manner the mixed choir „St. Vasilije of Ostrog“, from the St. Vasilije of Ostrog Church in Bezanijska Kosa, where the metropolitan served his last liturgy, gave the final artistic note for this evening. Under the direction of Katarina Bozic, the dedicated chanters first, accompanied by Dr. Milos Vesin, performed the composition „Gospodi spasi blagocestivija“ by Miodrag Govedarica, followed by a Russian spiritual treasure „Budi Imja Gospodnje“ by Dmytro Bortniansky.

Special thanks were given to the Board of the Temple of St. Sava on Vracar headed by His Grace Bishop Arsenije of Toplica, the „Slovo Ljublje“ radio and television „Hram“, the respected family of the late metropolitan Christopher and all of those, not sparing the resources and funds, helped in publishing this special book that it be unto the salvation of both our people and all others.