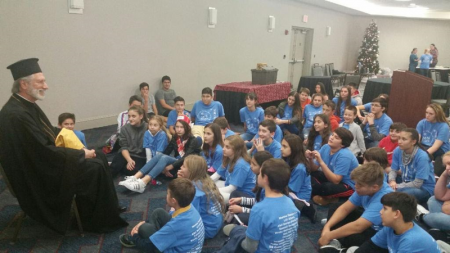 Atlanta, GA – This year's host for the Winter Camp of St. Petersburg's Deanery was the parish of Sts. Peter and Paul, here in Atlanta, GA. The main theme of the camp was "According to your faith let it be done to you." Matthew 9:29.

This year’s winter youth camp had a record number of participants. The host parish of Saint Apostles Peter and Paul welcomed and successfully organized this event and proved to be up to the task, with good will and determination of all, despite its modest possibilities. The parish is currently renting a place for worship, since there is ongoing work and construction, on the church property. Most of the camp activities were held in the local Hilton hotel, where the guests resided during the days of the camp.

The winter camp began on Thursday, December 22, in the afternoon, as children and adults from several parishes arrived. Among them were the church members of: Charlotte, Greensboro, Clearwater, Jacksonville, Orlando, and St. Petersburg parishes. Following the registration of the campers, a Lenten dinner was served for all the guests and children were introduced. Each camper received a special “Winter camp 2016” T-shirt. It was a night of great joy and fun, as many Serbian youth from different parishes gathered together, some for the first time, while some already knew each other, from the previous Serbian youth camps.

On Friday December 23, in the morning, after breakfast, children were divided into age groups with the visiting Serbian priests, who had spent time with them, teaching on important facts of the Orthodox faith, both through evangelical examples and with many examples from everyday life. The children learned the significance of the strong faith and its relevance in our lives.

On Friday evening, after returning from the monastery, the campers participated in the dance lessons, learning “Kolo” and other dances from different parts of Serbia.

On Saturday December 24, after breakfast and regular morning lessons schedule, participants of the camp visited famous "Medieval Times" grounds, where they watched a wonderful performance of the medieval games with a skillful use of heavy armors and gear. Everyone had a great time at the Medieval Times.

On the way back to the Hilton hotel, they greeted His Grace Bishop Irinej. This was also His Grace’s first canonical visit to Sts. Peter and Paul parish, since he was placed as the head of the Eastern Diocese. Gathered around Bishop Irinej, children had many questions about our Faith, to which our bishop was very pleased to respond. The conversation extended for a long time and it was well met by all of the campers and guests. At the end of the meeting our Bishop Irinej surprised our young campers with gifts as each child was presented with children's Orthodox prayer books. Following dinner, the young campers were divided again into small groups and each was in charge of making a gingerbread house, for a fun competition. The winners of this competition were announced that evening.

On Sunday morning, December 25, the campers arrived to the temporary church premises, along with many members of Atlanta parish, to attended the Hierarchical Divine Liturgy that was officiated by His Grace, Bishop Irinej. Also serving were Fr. Milan Krstic from Miami, Fr. Dragan Zaric from Clearwater, Fr. Nemanja Tesic from Charlotte, Fr. Stanislav Kravljaca from Jacksonville, and the host priest, Fr. Miladin Blagojevic. Bishop Irinej’s thoughtful sermon, was true inspirational food for all who attended this Holy Liturgy.

After the Divine Liturgy, everyone enjoyed delicious Lenten lunch. Same day, His Grace Bishop Irinej and the priests, visited church property where they were introduced to the architectural plans of church construction and the ongoing preparatory work on the property grounds.

At the end of his visit, Bishop Irinej gave his blessing to our campers as they parted ways until the next time they meet again.  The final evening of this year’s camp has slowly arrived and once again everybody was gathered at the Hilton hotel for night of fun and games. To ensure that the children will indeed take with them something valuable from this camp, parish priest Fr. Miladin created a fun and energetic quiz/jeopardy that became absolute hit not only among kids but parents attending as well. As the conclusion of the games all campers were proclaimed winners and were awarded gifts that sure did put a smile on all the little faces. Festivities, dancing and good atmosphere continued until late hours as nobody wanted the camp to end.

Monday morning, December 26, following breakfast and prayer a sad moment of parting ways has conclude this year’s camp.  As new friendships have been formed, old made stronger everybody went they separate ways until next year when they will meet once again.  Gratitude and heartfelt thanks to the Atlanta parish was extended from all the guests and priest. As many noted, camp was a great success and true testament that even if things are not all perfect, and if you don’t have church, hall and all necessary facilities, but you do have Faith in God things will come together and the turnout will indeed be grand. And with that thought the theme of this year’s camp was once again highlighted as a real life testament of the words spoken in Matthew 9:29.

Article by Mirjana B. 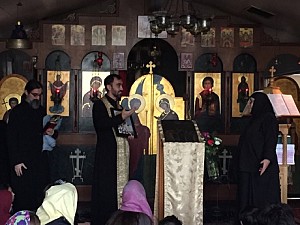