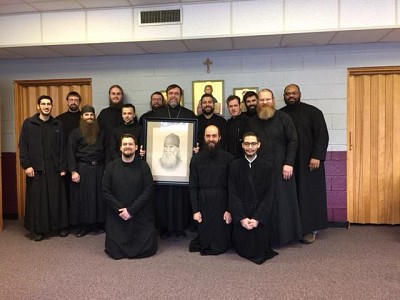 On Friday December 9th / 2016, lectures for the Autumn Semester at St. Tikhon's Orthodox Theological Seminary were concluded.
Due to the departure of Dr. Harry Boosalis, professor of Dogmatics, for the purpose of a sabbatical on Mt. Athos, the Dean of St. Tikhon's Seminary, V. Rev. Fr. Steven Voytovich D.Min., on the recommendation of the Committee on Faculty Administration, extended the honor to Fr. Milorad Orlic (STOTS 2012), of St.Nicholas Serbian Orthodox Church in Philadelphia, PA., the position of Lecturer in Dogmatics for the 2016/2017 Academic Year.
In an amazing gesture of gratitude for his efforts, on the last day of lectures the students presented Fr. Milorad with a magnificent portrait of St. Justin (Popovic) of Chelije, whom Fr. Milorad had familiarized the students with during this semester, and whose writings would have been unavailable to the students, as they are largely untranslated from the original Serbian.
As one who is usually never at a loss for words, Fr. Milorad was speechless when his students unpacked their gift, and presented it to him.
Pictured with Fr. Milorad: kneeling: Alex Norton, Augustine Lewton, Isaac Lampart. Standing: Gregory Marini , Joseph Sharman, Brother Daniel Armstrong, John Parker, Robert West, George Davis, Yazen Fakhouri , Benjamin Cabe, Moses Locke, Timothy Kolb, and Joseph Douglas Clark
Share This: